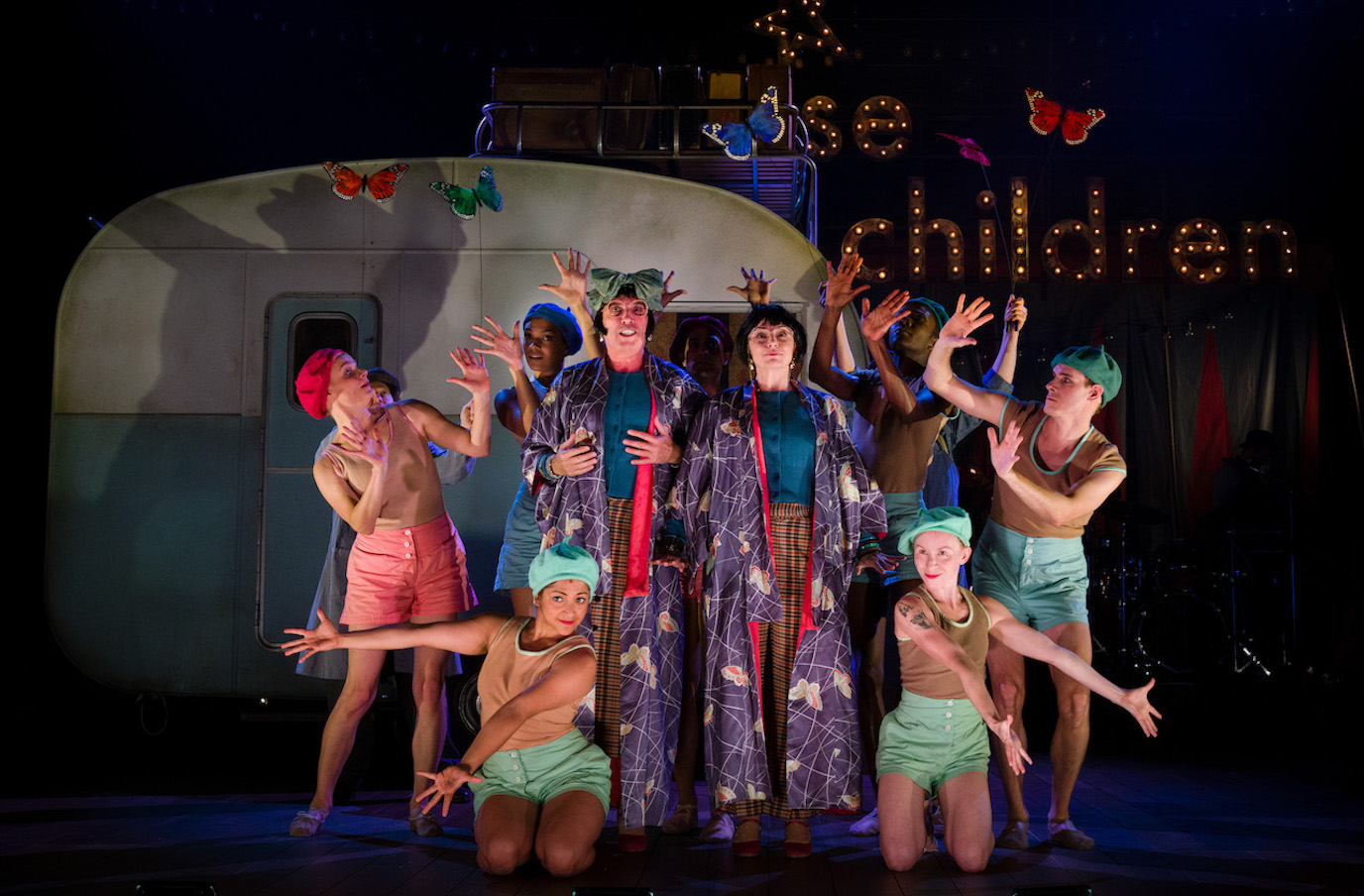 Angela Carter once said that the greatest “feminine” writer who ever lived was Dostoyevski, and that D. H. Lawrence was infinitely more feminine than Jane Austen. Lawrence’s “tragedy”, according to Carter, was that “he thought he was a man”. Carter’s rejection of traditional definers of identity is an aspect of her work that is celebrated in Emma Rice’s 2018 stage adaptation of Wise Children, Carter’s last novel before her untimely death in 1992.

In Rice’s production, characters are not restricted by the boundaries of race or gender. The main roles of twin sisters Dora and Nora Chance, former show girls now in their seventies, are played by a variety of actors throughout the production, as they present their sometimes glamorous, occasionally tragic, and often scandalous life history. Coherence is provided via framing narration by the elderly sisters, played by Etta Murfitt and Gareth Snook. Snook, in particular, captures Carter’s warmth and irreverence through a charming, conversational style of delivery, while Omari Douglas provides a standout performance as Nora in her showgirl days, channelling the glittering exuberance of the original novel.

It was an ambitious move by Rice to try to translate the richness and complexity of Carter’s writing onto the stage. The novel’s magic realism and Carter’s signature style – combining both baroque elegance and unapologetic vulgarity – are represented here through use of puppetry, clowning, vaudeville-inspired musical numbers and dancing. While this attempt to capture the carnivalesque nature of Carter’s imaginative world is sometimes effective, at other points it seems to dilute the beauty of the original, reducing it to its silliest and most crass elements. A comic performance by Katy Owen as the sisters’ grandmother is amusing, but occasionally becomes gratingly cartoonish. Similarly, Carter’s exploration of Freudian ideas is somewhat divested of nuance here: for example, in a scene which alludes to childhood sexual abuse that would have benefited from being slightly more anchored in graspable meaning.

Some of these apparent flaws are excusable, if not inevitable, in a show based on a novel thematically concerned with blurring the lines between high-brow and low-brow culture. Rice clearly appreciates both Carter’s disdain for snobbery and her sense of humour.  Shakespearian references are interspersed with bawdy jokes and popular show tunes in a way that is often deeply satisfying. Set and costume designer, Vicki Mortimer, combines a tawdry caravan setting with the glamorous costumes of London theatre in a way that effectively communicates the intoxicating chaos of the lives of characters – individuals who refuse to be limited by misfortune, but wholeheartedly embrace the mayhem of life “on the wrong side of the tracks”.

The show’s most impactful moments are in the uplifting and celebratory finale. The central characters’ determination to stay happy, and to not take life too seriously, is channelled movingly in the show’s genuinely joy-inducing final musical number. In these uncertain times, Rice’s (and Carter’s) absolute insistence on optimism about the future, regardless of circumstance, is a welcome tonic, making Wise Children an ultimately refreshing and inspiring watch. It also serves as a timely reminder of the show’s repeated refrain: “what a joy it is to dance and sing!”

Wise Children
is available to watch on iPlayer here