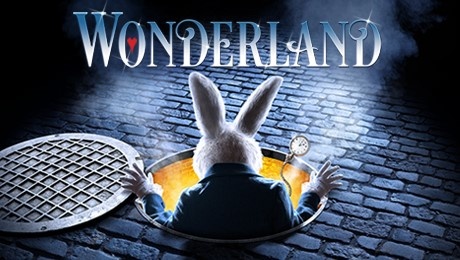 A musical, full of wonder and magic, that will transport you away from the worries of everyday life, if only for two hours.

Sure to become classics

Wonderland, the long awaited new musical from American composer, Frank Wildhorn, known for both his musicals and songs, receives its UK and European premiere at the Edinburgh Playhouse this week.

The musical started out originally as a record idea by Wildhorn, with a stellar cast of Avril Lavigne as Alice, Bette Midler as the Queen of Hearts and Luther Vandross as the Caterpillar. But it never materialised and has instead become the theatre’s gain, rather than the record industry’s.

A reworking of Lewis Carroll’s Alice’s Adventures in Wonderland and Through the Looking Glass, Wonderland is a musical adaptation with a fantastic set, costumes, and a cast that is full of magic that will enchant fans and even those less familiar with Carroll’s books.

A touching mother and daughter story, it’s an adventurous exploration of who we are, who we want to be and the power of everyday magic. It’s also a strong morality tale, about not wanting to live in the real world, leading us to a conclusion that you can follow your own particular dream.

The musical opens in contemporary everyday, with Alice as a mum who is disillusioned with life, hampered by love for her ex-husband and the disillusionment of their marriage, not knowing what to do or how to change.

With the help of her daughter Ellie and neighbour Jack, Alice finds herself transported into the magical world of Wonderland. Here, Alice, Ellie and Jack meet the White Rabbit, Mad Hatter, Caterpillar, Cheshire Cat and March Hare who all have a tale to tell. However, their world, ruled by the Queen of Hearts, is also far from perfect. It’s up to Alice to try and save the day and get her family back home.

This musical works as an ensemble and whilst some performers get star billing for their past theatre and TV successes, each and every cast member is a star in their own right. Particular mention goes to Natalie McQueen as the Mad Hatter. The character carries much of the storyline and McQueen is mesmerising, with one hell of a voice.

Coronation Street fans will recognise Wendi Peters, who played Cilla Battersby-Brown, and stars as the Queen of Hearts. With a belter of a voice, she brings great wit and class to the part, leaving you laughing out loud. Hats off to her for the constant comedic eating of those jam tarts, at every performance!

Dave Willetts, who has previously starred in tours of South Pacific and 42nd Street plays the White Rabbit, and helps to narrate the storyline. Reminiscent of Sugar’s side kick, Nick Hewer in The Apprentice, it’s a fine performance played with wit and patriarchal wisdom.

Whilst the songs won’t be familiar to the masses just now, the music by Frank Wildhorn and lyrics by Jack Murphy have some witty and quirky lines, and are sure to become musical classics in the future. Stand out songs include This Is Who I Am (Alice, Mad Hatter), Off With Their Heads (Queen of Hearts, Company) and the finale song, Finding Wonderland (Alice, Company).

Produced by Neil Eckersley, Wonderland has all the chemistry for an award winning show – great music, direction (Lotte Wakeman), set design (Andrew Riley), costumes (Grace Smart), and choreography (Lucie Pankhurst), all brought together with an energetic and enthusiastic company.

My top writer’s pick for 2017 on The Wee Review, if you’re a fan of the big musicals like Wicked and Matilda, you’ll love this, but don’t be late, as it only runs until the end of the week in Edinburgh; you’ll be able to catch it at other Scottish venues later in the year.