A motivating tale of protest

Taking place in the fittingly intimate Forest Fringe venue, ten-a-penny student-liberal-type Kieran Hurley engages the audience with a recounting of his trip to a G8 demonstration in L’Aquila. Stopping en route for a righteousness boost at a Pattie Smith concert, Hurley finds hitchhiking breaks down the barriers of social isolation that are inherently tied up with environmental issues, as evidenced by motorways congested with gas-guzzling lone drivers, many of whom being the deluded ‘Explorer’ and ‘Rover’ types inside idiotically oversized four-wheel drives. Once there, however, Hurley finds that the demonstrators are struggling to break the habits of atomised society and engage with each other; “This can’t be what I travelled all this way to find”, he laments early on. Soon, though, he bonds with his fellow dissidents and, with a climactic slide show, brings the demonstration vividly to life as the protesters brave blistering heat and police battons (no cowardly task these days, with police all but having a license to kill anyone near a protest, be they involved in it or not)

Hurley is an endearing stage presence if lacking in true theatrics; one can identify with his intermittent screams of frustration at the environmental issue, for example, even if the scream itself seems devoid of real emotional depth. But if the show feels more like a visit to a dear friend than a night at the theatre, that’s not so bad a thing, and as Hurley closes with an invitation to attend the upcoming climate camp, you can’t help but feel a little more tender than when you came in, and a little more motivated too. 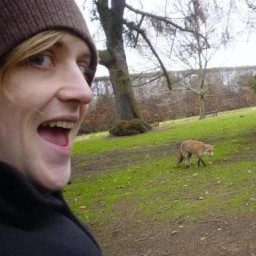