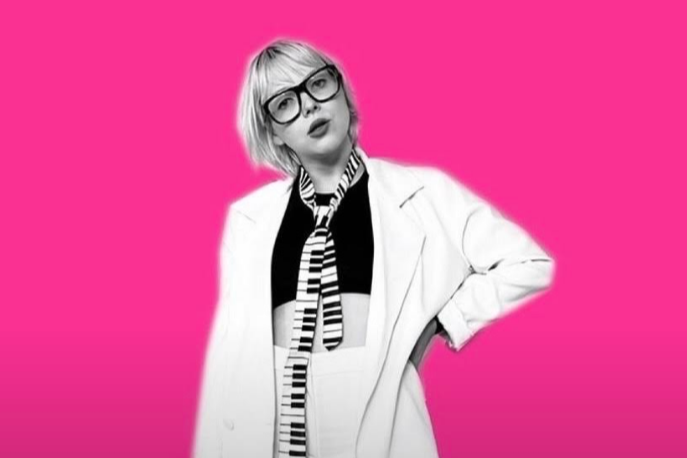 The musical comedian tells about her 'Greatest Hits!'

Amelia Bayler is a musical comedian based in Glasgow. In 2020 she won Best Newcomer at the Scottish Comedy Awards. Her comedy is a mix of hi-energy dance-pop on practically any subject (as her improvised Twitch stream demonstrates) with stand-up on subjects like sobriety, sexuality, and mental health. We spoke to Amelia about her show ‘Greatest Hits!’

You were becoming a regular fixture on the Scottish circuit until the pandemic hit. How have the last few years been for you?

A bit of a blur! I did a live stream on streaming site Twitch for a while from my bedroom: dressing up as snacks and improvising songs about snacks! It was mad and pure escapism. Loved it. That was a highlight. If I compare my act from pre-pandemic to post-pandemic I would say I’ve been doing a lot more weights so I’m way more muscly and also probably a lot more digestible as a comedian – which was a conscious decision recently. I wear a suit now! And a piano tie! The piano tracksuit and yellow wig and yellow sunglasses is a thing of 2019 (I loved that look but sometimes felt like I spent half the gig trying to make people trust me). I really would love a reviewer to comment on my muscly arms though! I seriously am way more muscly this year than the last time I did a full fringe run! And way more single! And slightly more chill. Maybe. No that’s not true actually. I’m not chill at all.

Can you tell us about ‘Greatest Hits!’?

I’m buzzing to bring this show to the fringe! It’s all my best tracks and then some chat in between about relationships and my journey with sobriety and as always I talk about snacks. I’m very proud of myself as a songwriter. It’s the one thing I know I’m genuinely good at. That and reinventing my stage looks, haha. I’m absolutely buzzing to be at Monkey Barrel Comedy. Every year I see some of my favourite shows there so feels like a pure pinch myself moment. Very grateful. This show I guess is also kinda a way for me to reflect how songwriting has helped me through some genuinely intense times!

I’d love to get to the end of it (like I do each Fringe) having grown as a performer – just getting into the groove and that. Each year I do the Fringe I also meet more of my audience if you know what I mean? So hoping for more of that! A big dream is to get an agent/meet agents and build some connections. I feel weird saying that, like does that sound mental? But trying to manifest it so… that is my answer. Side note: I need to make sure to get some paella from the stalls in the Grassmarket as well. And ice cream from Mary’s Milk Bar. I feel like I’ve been too honest, haha.

Best thing is being able to gig every day for a month and go and see shows worse thing is the fact it’s so expensive (and getting more expensive each year) and therefore not accessible for everyone or puts people into debt.

As well as ‘Greatest Hits!’, can we expect to see you guesting in other shows during the Fringe?

Yeah hopefully gonna be hitting up The Big Show at Monkey Barrel Comedy and also the Musical Comedy Showcase! Let’s make musical comedy cool again, haha. (I will be wearing my piano tie).

Will also be at the iconic The Alternative Comedy Memorial Society (ACMS) at Monkey Barrel. That was a dream of mine for many many years and so so excited to be on the bill! I feel very at home there, haha.

If anyone reading this books a compilation show, please can I do a spot!?

Check out John Aggasild’s show ‘Welcome Back’. It’s at 10:40 in the morning at City Café. He’s written an actual romantic comedy but it’s based on an absolutely mad true story. If you’re going to the show let me know, we can get a City Café breakfast beforehand!