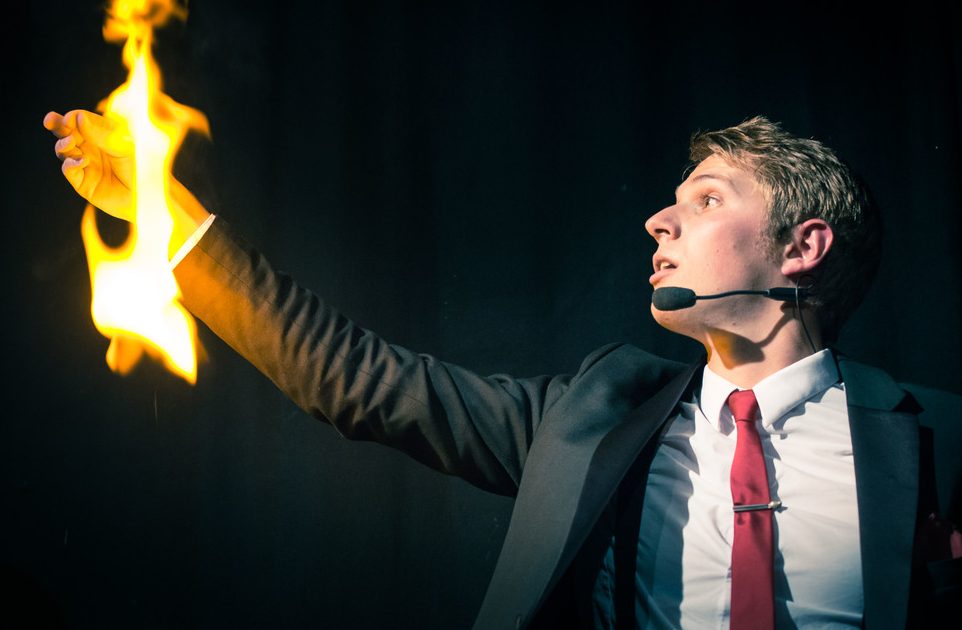 The magician who hates magic shows gives us the low-down on his Fringe.

After virtually zero marketing and getting sick in the final week, magician Chris Cook is pretty chuffed with this year’s Edinburgh Fringe. It’s his fourth time wowing audiences, but this year’s show came with an aim: leave the show better people than when you came in.

“I’ve always tried to bring something new and different to the Fringe because I don’t really like magic shows, as a general rule,” he says. “Magic is stuck where stand-up comedy was in the 80s” – too many straight white men in suits stealing each other’s jokes.

“Magic shows tend to be like a magazine, ‘here’s a load of my tricks’. That’s okay, but you don’t want to go see a show that looks like a magazine, you want to see something that feels like a novel.”

Chris Cook: Control relies heavily on audience participation, with tricks and comedic moments peppered throughout. The final stunt is not a magic trick at all, something Cook admits was rather ballsy. And intertwining a poignant message with the stunts has Cook feeling like he’s cracked it. He had another show, Chris Cook: Concealed running throughout the Fringe, but says all the focus for him was on Chris Cook: Control.

To keep the authenticity of Control where Cook is as open with the audience as they are with him, Cook is unable to have a stage name. He regrets this a little as it’s appealing to come off stage and say “no, I’m not that guy.” And yet, the show is more real because of it.

Still, changes were made during the run, such as script tightening and adding tricks here and there for amazement and comedic value. In order for Cook’s show to work, the audience has to like him and trust him, and understand he’s not taking himself too seriously. “I changed the show to make it more in tone with that.”

The biggest change Cook made though was telling the audience what the aim was at the beginning. And then at the end admitting he doesn’t know if the aim was met, it’s dependent on the audience.

While proud of the fact virtually no marketing was involved for his shows, he admits it was a little “stupid”.

“My show [Control] wasn’t full every day. It was full every weekend and was nearly full on a lot of days. There were some days there were 20 or 40 extra seats and I could have made more effort into filling them.” Still, he’s happy no money was given to Facebook or paid adverts.

“I hate self-promotion, it feels really needy. But I get why people do it.”

And on charging for his shows, Cook’s reluctance is clear. He made money from his show, something many artists don’t, and he adores the PBH Free Fringe. “We don’t get shafted and they treat us really well. It feels more like a community than the paid venues feel.”

However, one niggle remains with Cook about free shows. “If you’re doing a free show it’s quite important to end your show in a positive way. The more the audience like you, the more money they’re going to leave you.”

“I’ve seen some really good, challenging pieces of theatre where at the end you don’t know if you like the person. If you’d paid ten pounds for a ticket then that’s fine, but at the end of the show you might not give that person ten pounds. It’s not a reflection on how good the show was, it’s a reflection of what you thought of that person.”

Given the nature of Cook’s shows, however, he says that probably won’t affect him so much.

Coming into next year’s Fringe, or even the year after, a different Chris Cook may emerge.

“If I died tomorrow, I would regret not doing a show at the Fringe that wasn’t a magic show. I’d love to do that, but I don’t really know what I would do.” A mix of storytelling and comedy is on the cards, perhaps some clowning and physical theatre.

“It’s scary,” he says, but watch this space…