Skip to content
Ashley Doherty talks to Contemporary Performer Andrew Henry about Scarred, a site-specific solo performance to be showcased at the Drama and Theatre Arts Graduate Show at the end of the month.

Ashley Doherty talks to Contemporary Performer Andrew Henry about Scarred, a site-specific solo performance to be showcased at the Drama and Theatre Arts Graduate Show at the end of the month.

Ashley Doherty talks to Contemporary Performer Andrew Henry about Scarred, a site-specific solo performance to be showcased at the Drama and Theatre Arts Graduate Show at the end of the month.

Although your show will be performed in the grounds of Queen Margaret University, you’re focussing on your hometown, Hamilton, why did you decide to go down this route?

When I got to fourth year of my course, I wanted to talk about something different, something that I hadn’t spoken about before and the logical place for me to start was Hamilton. I then began to look at news headlines from back home and realised that there had been an upsurge in knife crime and the link between this and anti-sectarian behaviour was something that really resonated with me.

You’ve decided to put on a site-specific performance, how did you fuse your subject matter with your chosen site or route?

My route on campus follows all of the industrial parts, the parts that students and visitors aren’t supposed to see, or don’t necessarily want or need to see in the everyday. And, the similarities really struck me – QMU is right beside the motorway and the feeling and presence of that structure reminded me of the M74’s dominance in Hamilton and then, Musselburgh’s proximity to the town centre is similar to the distance between Hamilton and Glasgow. So, the same atmosphere is there. My site also opened up other strands that I have explored, for example, at every point on my route, at least one CCTV camera is always present so I started linking that back to my memories of Hamilton.

When we hear success stories of people from the west, we always think they’ve climbed a higher ladder than anyone else to get to the top, you have to convince more people because of the negative connotations associated with things like accent and social status.

Your show also follows a solider returning to Hamilton from Afghanistan, so there are clearly a lot of different layers to this story.  How have you dealt with this complexity?

There are so many different layers so it’s about finding the balance at the moment because I could go down so many rabbit holes. But, I was inspired by a show that I saw at the fringe last year, En Route, that was based around an audio-guide. That was quite information-heavy but was so interesting and still worked really well. So I’m attempting to twin that idea with a concept I’ve been looking at called mytho-geography.

It could be argued that the issues that you’re exploring are unique to the West of Scotland. Is that a tension that you’ve come up against in your process? And if so how will you make your subject area accessible to an East coast audience?

Well, I always start my process from writing and when I started writing this piece it spoke very loudly about West of Scotland issues. But they resonate with anyone. Especially when you look at all the headlines over the last week surrounding the old firm, that concept is so easily translatable to the whole of Scotland. And also, I think something that we can all relate to is that when we hear success stories of people from the west, we always think they’ve climbed a higher ladder than anyone else to get to the top, you have to convince more people because of the negative connotations associated with things like accent and social status.

You’re obviously deeply passionate about where you come from; do you think Hamilton will always be a source of inspiration for you?

I am hugely influenced by my past, I always bring it to my work and that’s something I never want to move away from because it has shaped me so much. The thing that strikes me most about Scotland is that it’s so regional and we’re all so proud of our heritage and yet very much divided. And this fierce pride is romanticised quite a lot, I’m guilty for doing it too. I found it hard to adjust when I moved over to the East coast. I think Hamilton will always influence me, there’s so much there, there are so many stories and so much conflict – from a very young age, you’re forced into discourses that you don’t even understand, these aren’t issues that are as much in the limelight from other parts of the country.

Looking back at your time on the Drama and Theatre Arts Course, particularly your specialism (Contemporary Performance in Action), what would you say you have gained from it?

Although the eight people on my specialism have different artistic and political sensibilities, I can honestly say that we will all walk away with an appreciation and knowledge of contemporary performance that will serve us well when we go out into the professional world. Importantly, because, the lecturer to student ratio is so small, we get specialised and personal development that is unrivalled in any other drama course that I know of in Scotland. I came on the course because of the intense nature of the specialism route and I feel like I’ve learnt a trade, one that’s transferable to the workplace.  Although there are a lot of people out there producing work I think that my colleagues and I have a major advantage because we have learnt and explored in-depth the things that are at the fore-front of contemporary discourse.

Finally, what can audiences expect from your show?

I’d like people to have a profound experience and also to maybe learn a bit more about the West of Scotland and the characters that live there but I also want to open up a discourse about memory, hometown and arguments about warfare.

Scarred will take place between Wednesday 30th March and Saturday 2nd April at 6pm, Queen Margaret University, Musselburgh, EH21 6UU.  All audience members should meet at the Student’s Union 15 minutes prior to start time. For more information and to reserve places at qmugradshow2011@gmail.com 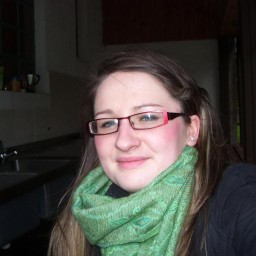