Playwright Eddie Small talks about The Four Marys, his new play, commissioned for the centenary of Mary Slessor’s death

The Four Marys opened this weekend at Dundee’s historic Verdant Works for a limited run.  The play centres around Dundee’s four iconic Marys – Slessor, Brooksbank, Walker and Baxter who each helped shape the city in their different ways.  Meeting in a disused jute mill, they discuss the Dundee spread out before them and each other’s role in forcing change.

The Wee Review didn’t get to meet the play’s writer Eddie Small in a disused mill, but we did get to meet him in a lecture hall at the University of Dundee. Here’s what he had to say…

You’ve written a novel in the past about Mary Lily Walker, did that make it easier or harder when writing The Four Marys?

No, not at all, it made it a lot easier. What I was challenged to do was to try and find the character in each of these four Marys and try and bring them together in something celebrating Dundee’s women and also as part of the anniversary of Mary Slessor’s death.  Having done Mary Lily Walker and getting a real sense of how dire conditions were in her time, it was an excellent starting point to look at Mary Ann Baxter, Mary Brooksbank and Mary Slessor – so having that as a starting point made all of it a lot simpler.

Yeah, it was always going to be a play. The intrigue in it was bringing four people from different eras together in a way that wasn’t banal, wasn’t silly – that was the challenge. I was confident in getting the voices right and bringing in historically accurate information was never going to be a problem. The main thing was how to bring them together in away that was acceptable and possible.

What was the biggest challenge, as each of the Marys were from different time periods.

They are, and different backgrounds, but there are similarities; two of them are more privileged than the other two. My idea was to have tensions in it, to create tensions to see how they played out between people who had and people who struggled to have. But I also want to get the character of the people. So some of them – Mary Lily Walker is a very shy person, so that needed to come through, very shy and modest. Well, they’re all modest to some degree. Mary Ann Baxter, on the other hand, is part of a family with incalculable wealth, and what comes with wealth is a sense of confidence and assurance and a looking for what you want, and getting it almost all of the time. So it was a case of four very different characters, from different eras and how to bring them together. There’s a sense of fairness playing all the way through it, nobody is dominating.

I was asked by Anna Day who is the Dundee University Press person. She works for our public engagement department and she had the idea of doing The Four Marys. It actually comes from a Dundee comic, the Bunty, where the Four Marys was a take on Mary, Queen of Scots‘ four ladies in waiting. The Four Marys were there in that sort of modern school version and she liked that; and we do have four Marys who stand out in Dundee. So that was the theme: let’s bring in the Four Marys.

Initially, we were going to be writing it together, but time proved to be a huge problem. To be honest, two people writing one thing is extremely difficult, it’s infinitely easier doing it on your own. Eventually it came to the stage where I knew when we would have to put it on – it has been part of the Slessor Anniversary celebration event calendar since long before I even knew they wanted to do it. So I really had to take it on to do myself as Anna and me couldn’t get together to do it. What I constructed, built and developed was very much my own idea rather than two minds coming together.

The play revolves around the impact that each of the Marys had on Dundee. In your opinion who has had the most lasting?

That’s an incredibly difficult thing to say. It depends on how you look at “lasting”.

Mary Slessor, the one’s whose centenary year we’re going through, has probably had the least impact on Dundee – she goes to Nigeria, she does incredible things there. The stories about her there come back here very strongly, but in terms of what she does in Dundee, it’s almost nothing. She went there as a 28 year-old and died there aged 67, so her contribution to Dundee is really only in the spirit, in the sense of what Dundee women can do. You could argue that she is almost mad at times, but she did something that defied the imagination for many people. For a lone woman to go up into the jungle and live with cannibals and people who hadn’t seen white people – for that time it was beyond belief.

Mary Lily Walker does incredible stuff, social work from around 1895 up until she dies. Her work is huge, but never really made much of. It may have had a bigger impact on the Liberal government than it did in Dundee itself. Her help here to people was sadly only to a small group. You can only help so many mothers, so many children, by putting in the ideas like milk depots, like clinics for kids, that were never in existence before. You are going to get to some, but never to them all.

Mary Ann Baxter is huge donator of money, not just to the University of Dundee. She gives £140,000 to open this place – that’s the equivalent today of somewhere between £65 and £175 million. It’s huge money and she’s only one of a family of eight. So you kind of know the type of money Dundee Jute barons are making. She gives way beyond that; she’s a very religious person and gives to missionary work and a lot of local charities. When she died, it really is grieved right across Dundee because of her benevolence.

Mary Brooksbank comes last; her real claim to fame is being in jail a couple of times. She believed women deserve better rates of pay – all workers do, but particularly women. She’s quite prepared to go to jail for her beliefs. She does heckling in the city square ,and she does make it work – she gets extra money, initially for younger girls, through striking.

So, they are all very different, but which one do you say does the most? I supposed if you absolutely pushed me it was Mary Lily Walker, just because of the different things she did. She opened the first ever women’s hospital in Dundee, nursed by women, doctored by women, entirely for women. A huge step forward.

Am I correct in thinking that when you first wrote the first The Four Marys you didn’t know that it would be playing in the Verdant Works? How do you think this will impact the play?

That’s an interesting one; my intention was to bring these characters alive and I needed a venue. It’s a modern audience, if the story is not exactly modern, so I actually based it in the Verdant Works not knowing that it would be in the Verdant Works – I wanted to give a sense of location for these people to come alive. When it was mooted that we could actually speak to the Verdant Works, it just seemed to chime perfectly.

What’s next for Eddie Small?

I teach playwriting, so this has been quite an interesting task because I know many people who I have taught in the very recent past will be coming along and running their finger along the dust of it to see what it’s like.

I’m writing a book on D’arcy Thomson just now. He’s Dundee based, so that’s on the go. One or two other little things I’m doing – 2017 is the 50th anniversary of this University’s [University of Dundee] independence. It became independent from St Andrews in 1967, so there are many things being mooted for 2017. I’ve written lectures on several of the real characters whose likes we don’t have now. People who could do more than one thing exceedingly well. We had the real luck of D’arcy Thomson, Patrick Goodison and Geoffrey Dutton – they’re really oddball characters who can do anything. So I’ve written a series of lectures on them. 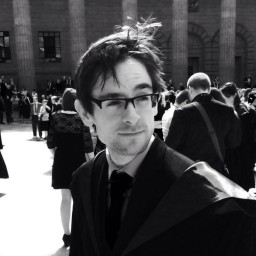 A loving homage to two titans of comedy

One thought on “Eddie Small”