Skip to content
Resident opera queen Jen McGregor gets together with Elena Xanthoudakis to discuss the reworkings of this classic opera. At the Kings' Theatre (20-28 Nov)

Resident opera queen Jen McGregor gets together with Elena Xanthoudakis to discuss the reworkings of this classic opera. At the Kings’ Theatre (20-28 Nov)

I catch up with glamorous soprano Elena Xanthoudakis in between meetings to plan her future projects and an appointment to have fake eyelashes applied. Last time she spoke to The Wee Review she was impressing critics with her comic skills at Opera North, and this time she is taking the lead in Donizetti’s comic opera L’elisir d’amore.

It’s frothy stuff – tenor Nemorino loves soprano Adina and buys a love potion from a charlatan doctor in the hope of winning her. It doesn’t work, but the events of the opera bring them together and there are happy endings all round. So far, so standard operatic heroine? Not so, says Elena.

“I don’t want Adina to be just a cardboard cut-out cheeky minx,” she says. “She’s more complex than that. It takes the situation of the opera to push her into realising that she actually loves Nemorino and did all along. I think they’ve always been attracted, but she has money and the freedom to choose a partner – which is quite unusual for a woman of her time – and at first she just can’t see herself marrying a farmer.”

It’s not just her characterisation that requires thorough preparation. Although it’s often given to young sopranos, Adina is vocally challenging. “You’re on stage for long periods without a break in this role,” Elena tells me. “Vocally it suits me well, but the challenge is the spacing.”

Looking at the petite Ms Xanthoudakis, you might wonder how she handles roles like this, which require a lot of stamina. Once again, the answer seems to lie in preparation – not just solid technique, but physical maintenance. She does yoga five or six times a week (“When I’m good! But I’m usually good.”) and goes to a chiropractor. Working on raked stages makes it easy for tension to develop and affect the voice, but it’s part of the job. Likewise travelling, with potential pitfalls like recirculated air and germ-smeared handrails. But Elena, recently returned from France, is armed and ready with a stash of Organic Throat Coat tea bags from Traditional Medicinals. She insists that I take one to try, so woe betide the next cold that thinks it can silence me!

There’s certainly plenty of travel in Elena’s future. The first half of 2010 alone will see her in London for Satyagraha at ENO, then in Quebec for more Donizetti in her first Lucia di Lammermoor. The production is being mounted specially for her following her prizewinning appearance in the Operalia contest in 2008.

In the meantime, she’s enjoying her time with Scottish Opera. “They’re very friendly and well-organised, and I feel at home here. And I really enjoyed their other current production, The Italian Girl in Algiers. They’ve adapted it so that it’s set in a soap opera called Algiers, using green screen on stage. It’s really innovative!”

If that sounds a little too innovative for some opera lovers’ liking, it should be well balanced by L’elisir d’amore. No radical reworkings here, just a gentle nudge from the early 19th to the early 20th century. 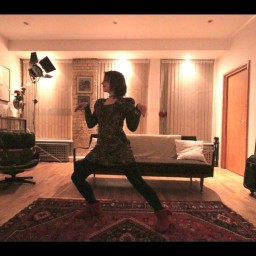 A collaboration par excellence of performance and direction, stage production, and cinematography