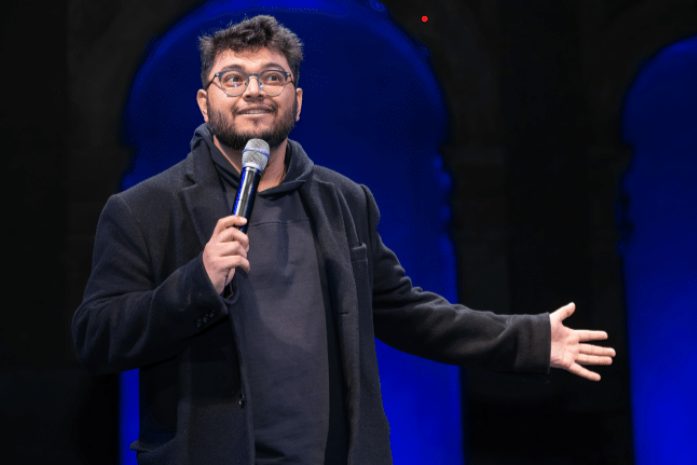 We chat to the comedian about his new show 'Illegally Funny'

Sid Singh is a comedian and refugee lawyer and activist. As well as performing all over Europe and North America he’s also written for various show on the BBC and Comic Central. We spoke to him about his new show ‘Illegally Funny’, how he managed to keep performing during the pandemic, and how he had a part in taking the Trump administration to court – and winning.

It’s possible that I have had the weirdest past two-three years out of any comedian. I basically got to continue performing all over Europe (while following the various regulations imposed by varying degrees of lockdown) all the while trying to raise money for these wonderful refugee organizations. I might be one of the few comedians who almost never had to stop performing aside from a few months here or there. The money that the audience gave via tickets and donations also got to go towards amazing people fighting the good fight. I’m as bewildered by that as you are reading it.

Can you tell us about ‘Illegally Funny’?

In 2019 I got to help raise money for an organization that took Donald Trump’s administration to court. I wrote a show about it called ‘American Refugee’! This is the sequel because spoiler alert: The Trump administration appealed our victory. Come watch the show to find out how that ended!

You draw on your volunteer work as a refugee and human rights lawyer in your show. Where do you find the humour in a job that you take very seriously?

If you cannot laugh at the darkness it will consume you. I’m lucky to volunteer with and for amazing people that are easy to empathize with and humanize. They make the jokes easy.

My hope is that a lot of people come with an open mind and ready to laugh. My much weirder, less likely hope is that my audiences full of middle-class British people remember and realize the collective power that they have. My show isn’t really about just refugees. It’s about them.

Have you had any really memorable Fringe experiences, good or bad, either as performer or as an audience member?

I once had two pigeons fly into my show and fuck during my show. That show didn’t make my top five craziest things that happened to me in my eight years at the Fringe.

There are so many great comics there this year! Go watch Freddi Gralle, Mike Rice, Tamer Kattan and Kat Nip! They’re all funny, interesting, and available to watch for free! Plus they’ve been performing all over Europe the past few years like me!