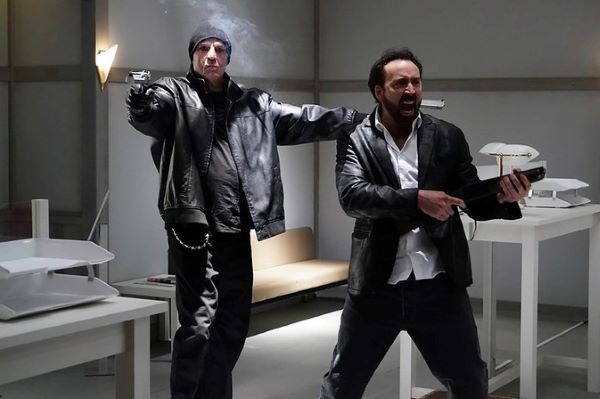 Sundance Round Up Part 4

The final quick round up of some of the other films from Sundance 2021.

Prisoners of the Ghostland (Sion Sono/ USA/ 2020/ 103 mins) is the frankly mouth-watering prospect of gonzo Japanese director Sion Sono teaming up with Nicolas Cage teaming up for a crossover Western/Eastern. Sono is present at his most idiosyncratic, and Cage is at his most Cage. For many people this will be enough. But while there’s certainly mileage in terms of sheer spectacle, this is far from the best work of either of these mavericks. The story revolves around a nameless bank robber (Cage) released from prison by the villainous Governor (Bill Moseley) of Samurai Town, an unfeasibly decadent frontier burg somewhere in Japan splattered with the iconography of both jidaigeki lore and a million Westerns, with a vibe falling somewhere between the Samurai World of Westworld‘s second season and Rome as imagined by Tinto Brass in Caligula. The price for his release is to track down escaped sex-worker Bernice (Sofia Boutella), who is allegedly held in the open prison of the Ghostland, a radiation-haunted ruin only slightly more nightmarish than Samurai Town itself.

The main issue with Prisoners of the Ghostland is that Sono is filming with one eye and winking at the audience with the other. The plot is almost a direct lift from Mad Max: Fury Road, with none of the rich world-building. Ghostland has some spectacular sets, but it feels like every single idea has been hurled in, regardless of whether it works or not. A roaring Cage curdles into camp amidst it all. He’s going for it for sure, but his current, self-consciously culty brand only works in the context of a coherent vision – Panos Cosmatos‘ Mandy, Richard Stanley‘s Color Out of Space being recent films that got the best out of him. Overall there’s a nasty aftertaste of laziness about the whole affair – a reek of ‘that will do’. Sadly, a dismal mess. 1/5.

Pieced together in an editing masterclass, Life in a Day 2020 (Kevin Macdonald/ UK, USA/ 2020/ 90 mins) is the result of an appeal from director Macdonald and executive producer Ridley Scott for anyone throughout the world to provide a snapshot of their day on July 25th last year. The 324,000 submissions from 192 countries have been reduced down to a dawn-to-dusk journey around the planet in 24 hours; the hatches, matches, dispatches, and everything in between. It’s a dizzying mix of the powerful, the joyous, the tragic, and the mundane. A worthy follow up to the original project from 2011, how much more it tells us about humanity is questionable, but it confirms a few things: technology has moved on immensely, and we appear to be far easier on the whole in front of a camera.

As you would expect, the pandemic looms large, with a significant section of the film dedicated to those working hard on the vaccines that are now available, those lamenting the lack of contact with loved ones, and those experiencing the sheer, crushing boredom of an enforced lockdown. A shout-out to the gentleman who named all the spiders in his flat. A few figures from the first film make an appearance. The most notable, and most poignant of these being a mother who plays a clip of her buoyant, energetic son from the original, before panning to an urn containing his ashes; an early victim of COVID-19. Some of the clips work more than others. Some feel devoid of context, and some are so mundane you wonder what possible reason have been found for their inclusion. More relevant are gnarly first-person accounts of marches, protests, and riots, mere weeks after the deaths of Brionna Taylor and George Floyd. The narrative, if there is one, is one of simple humanism. It’s a fascinating experiment to revisit, albeit one you won’t think too hard about until the next one rolls round in 2031. 3/5.

A far more conventional approach is taken in Amy Tan: Unintended Memoir (James Redford/ USA/ 2020/ 101 mins), an immersive biography of the massively influential Chinese-American author best know for her debut, the semi-autobiographical family chronicle The Joy Luck Club. Loosely adapted from 2017’s Where the Past Begins: A Writer’s Memoir, it goes in depth into Tan’s life from her birth to the present day. James Redford’s doc covers her traumatic childhood, her uneasy relationship with her mother, how she became a writer, her sudden and unexpected success, and her diagnosis with Lyme’s disease. Being an official account, Unintended Memoir benefits from extensive access to Tan, family and friends, and archive material from her life and work. It’s presented in a straight-forward manner, with little embellishment, confident in the appeal of its subject matter.

A good documentary will hold the attention even if the viewer has no prior interest in the subject. This is certainly the case here. Tan has lived a fascinating life and, unlike some writers, is comfortable in front of the camera and in telling her story orally. It is perhaps a little safe in presentation, far from the most vivid or audacious of the many documentaries at the festival, but it isn’t aiming to be. It’s a solid, respectful, and consistently interesting portrait of an iconic writer. It’s also sadly a poignant final film from director James Redford, who died in October 2020. 3/5.

All screened as part of Sundance Film Festival 2021