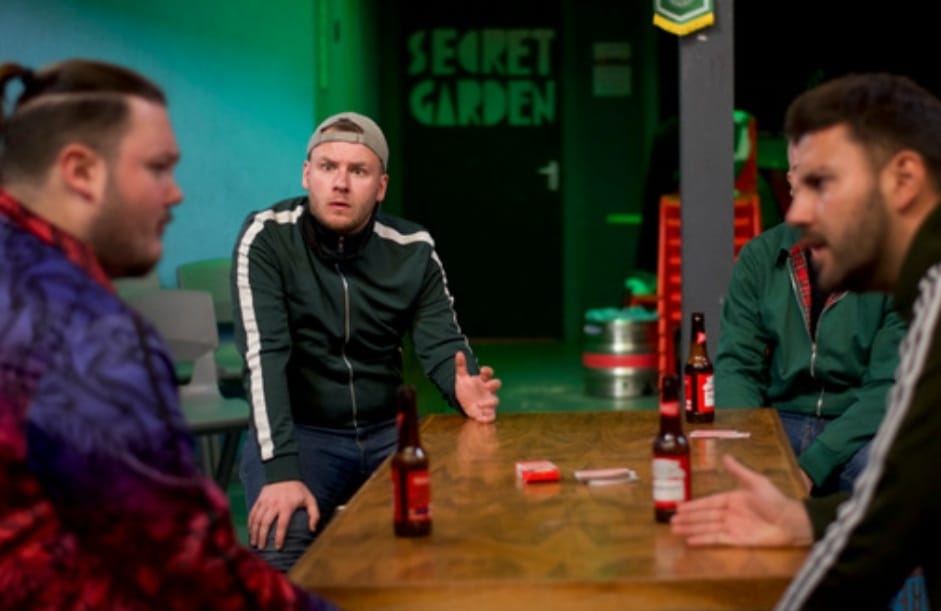 In 2016, football club Hibs won the Scottish Cup for the first time since 1902. And 1902 is the title of a Fringe show that celebrates the modern-day victory. Saltire Sky Theatre Company‘s production has sold out in three Fringe years. This year, you can find it at the grungily atmospheric Leith Arches: the perfect setting for this fast-paced, feisty drama.

Deeks (Nathan Scott-Dunn) has managed to lay his hands on four tickets for himself and his mates for the longed-for Scottish Cup final. But to buy them, he’s borrowed a grand from local lowlife Sambo (Gregor Copeland). When the debt is called in, an increasingly desperate Deeks is forced to make a decision that has devastating consequences.

Scott-Dunn’s script is a zippy mix of first-person narration and scenes mostly set in the Dug and Duck Bonnyrigg, interspersed with vigorously delivered football chants. As Deeks, he treads a perfect line between seeming to be someone who is master of everything but in reality, having almost nothing within his control.

His three mates nicely evoke the mundane monotony of life without much in the way of money or prospects – until Deeks rocks up with his tickets. All teeter on just the right side of being likeable with Frankie’s (Josh Brock) comic timing a particular highlight. Mags (Ella Stokes), the long-suffering barmaid is – presumably intentionally – for the most part, utterly unintelligible but this audience was unperturbed.

Directors Scott-Dunn and Sands Stirling make excellent use of the space in the Arches including the bar that we’re repeatedly entreated to visit. This is a compact space, encircled by a couple of rows of chairs. The actors preen, scheme, chant, holler, scrap and sweat inches from us. If you liked Trainspotting Live in 2019, you’ll love this. There’s a band with at least a couple of singers above us who offer both incidental music and rousing support for the handful of songs. Following months of no theatre, this brash, boisterous spectacle is a total treat, whether or not you’re fitba’ daft.

In line with current guidance, the seats are set out just as you’d expect in the Fringe which makes for a cosy audience. If you’re at all squeamish about such things as we (hopefully) stumble out of the pandemic, there’s a smart announcement up front inviting the audience to watch the show wearing masks or not, as they prefer. 1902 has sold out its last three Fringe runs. Judging by tonight’s riveted audience, this production looks set to do the same.

Trigger warning: Please note that there are several references to suicide within this play.