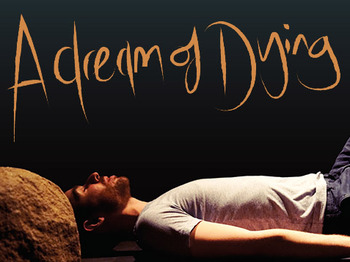 A Dream of Dying

A dreamlike insight into the mystery of Peter Bergmann

In 2009 an unidentified body was found on a quiet beach in Sligo, Ireland. It was later discovered the drowned corpse was a man who went by the false name Peter Bergmann. During the last days of his life, he had taken meticulously planned precautions to conceal his identity. Although the autopsy revealed he was suffering from several serious health problems, exactly how he died, and why, remains a mystery. A Dream of Dying by Treasa Nealon explores his unknown life before his mysterious death.

‘Dream’ is a very accurate summary of the entire one-man play. Like many dreams, the performance is fragmented, at times confusing and unclear. It allows the audience to feel as though they are almost reaching clarity, but then blurs the truth at the critical moment of understanding. While this may sap some of the enjoyment for some, this style is entirely appropriate for the mysterious story of Peter Bergmann.

It makes sense that the narrative is occasionally disjointed – jumping from past to present, mixing the imaginary and the real – because the information we have about the case is just as confusing in real life. Moreover, Lawrence Boothman’s scrupulous acting is engaging enough to lead the audience through each switch. He is particularly talented in embodying several characters on one stage. At times, it is easy to forget that there really is only one man on stage rather than an entire family, or a church full of mourners.

The play deals with the possible motives for his unusual death. One of the main suggestions is the realisation of his inability to control life, but the possibility of controlling one’s own death. We get an insight into the potential personality of this unknown person, and see an unbearably lonely man fall under the unexpected blows of life. The desperate tragedy of this delicate and sensitive performance is a balance to the constant comedy of the fringe.