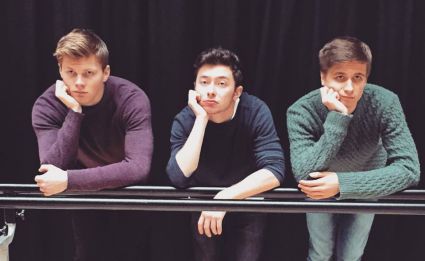 A funny side to suicide in Unearthed Theatre's impressive Fringe debut.

It’s obvious from the start that Three Jumpers, by Liverpool company Unearthed Theatre, is a cut above. A young man takes a running jump to throw himself off the bridge while a council worker watches on. He doesn’t go through with it, of course, but this high impact opening is immediately gripping. The dynamic between this well-spoken, suicidal gent in a suit and sardonic road-sweeper establishes a really nice tone that endures for the rest of the piece – we’re all of us, of all backgrounds, stuck dealing with the human condition, and we’re never far from the end, or from a stranger who might be able to help. Three Jumpers has hints of a morality play, with good, cheap laughs and bags of appeal.

Our man, a young doctor, will soon be joined on the bridge by two others – a queue of suicides, if you like – each wanting to go first, and yet really not wanting to go first. Their squabbles, though rooted in serious issues like unemployment, childlessness and relationship break-up, take on elements of farce, which means the play never dallies long in darkness or introspection, despite the subject matter. The men’s lives and their reasons for wanting to end it all are entwined in interesting ways that trace back to a single female character. Structurally, it’s excellent, offering up plenty of twists.

The way the characters’ backstories are explained could be tidied up a little, however. The play does tend to prize snappy dialogue over a more natural turn of events, and sometimes we leap rather abruptly into a scenario that doesn’t seem to have been adequately set up, such as when a couple who’ve met on a speed-dating night suddenly appear to have been engaged in a long-term affair. These are nothing but rough edges though, and if the play were extended to full length, as it could easily be, a few additional scenes could be used to iron that out.

A meaningful, lively and funny treatment of a dark topic, Three Jumpers is a very impressive Fringe debut.