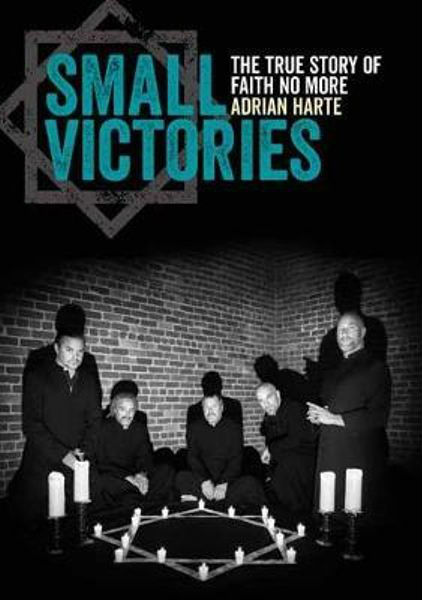 Faith No More have always been an unusual band, so it is no surprise that their story has been by written by an unusual biographer. As while most band biographies are brought to us by music writers, the author of this book, Adrian Harte, has a day job at UEFA (Europe’s Football Governing Body) as a media intelligence manager. That fact, however, does not provide any impediment in this meticulously researched and highly readable work.

It is clear from the beginning of the book that Harte has a great passion for the band and indeed he has run a Faith No More fan site since 2009. Despite Harte’s obvious fandom, this does not lead him to sugar-coat the various conflicts within the famously volatile band.

The book is possibly at its most fascinating in its opening section which explores the band’s pre-history and early beginnings. This section looks at the early life of the core three founding members; Bill Gould, Roddy Bottum & Mike Bordin and how they came together.  There is plenty of facts here in this part that even fans might not be aware. For example, how the classic line up guitarist Jim Martin was actually their eighth guitarist or how they were previously called Sharp Young Men and then Faith. No Man before hitting on the name of Faith No More.

Another impressive feature of the book is how, much like the band themselves, it largely steers clear of rock’n’roll cliché. Sure it touches on the heavy drinking and drug abuse of some members but rock’n’roll excess is not the focus here. Harte instead focuses on the music and the internal life of the members. Through Harte’s extensive interviews you really feel you get to know Gould, Bordin, and Bottum in particular. You also feel like you get a good insight into original vocalist Chuck Moseley and Martin too. It is only a shame that Mike Patton chose not to be interviewed for the book as it would have been good to see him in more depth as well, although Harte does well to piece together things on Patton through various magazine interviews.

If there are any issues, it is that the book is so meticulously researched that any errors really stick out. An example of such is when Harte writes about the introduction of guitarist Trey Spruance. Harte writes he was unveiled in a photo-shoot with Kerrang! with a mask on mockingly referencing Slipknot and other masked Nu-Metal bands. As this was 1994 and Slipknot were not to form for another year this is clearly impossible. Harte is also always quick to hammer home how revolutionary and innovative the band are and, to be fair, it is hard to overstate the impact the band had on 90s & 00s metal and alternative rock, even if they do hate a lot of the bands that cited them as an influence.

Small Victories will surely prove to be the definitive book on a band who were long overdue the biographical treatment.

Adrian Harte – Small Victories: The True Story of Faith No More is published by Jawbone Press on Wed 12 Sep 2018