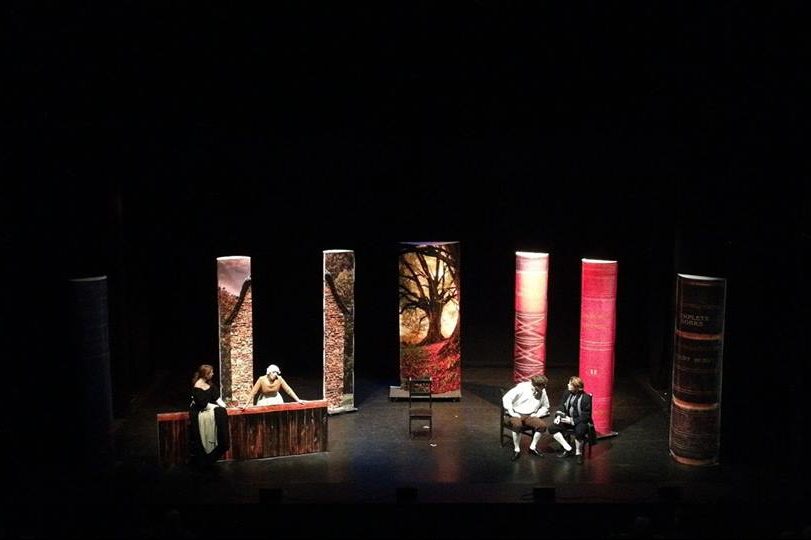 Of course the audience know them: the tunes played over the tannoy while we take our seats. They are engraved on the national psyche, and the grey-headed crowd hum along with glee. They have come for their annual fix of the nation’s favourite lovable rogue Rabbie Burns, and for the most part, they weren’t disappointed by Nonsenseroom Productions’ offering.

Paul Beeson‘s delivery of the largely rhyming narration in Scots catches some by surprise, and his is a gargantuan task – to memorise a tight, wordy and often witty script. He is at his best during imagined recitals of Tam-O-Shanter but never seems less than secure. Direct narration by the main character avoids rambling, and there are some very entertaining moments such as the narrator Burns handing his flashback father a tankard to celebrate his own birth.

However, this was billed as an evening of songs, and it’s fair to say that not all notes are hit with the same aplomb, although the female voices are generally strong. The four-strong cast also includes Shawney Henderson, Zoe Halliday and Gilchrist Muir, who between them cover all the principal characters we are familiar with in Burns’ life and work: Handsome Nell, Highland Mary, the poet’s brother Gilbert, the mysterious Clarinda, and of course the poet’s long-suffering wife Jean Armour. The many women characters are delivered with welcome subtlety while many of the male characters such as Jean’s irate father, the needlessly uber-camp publisher and Clarinda’s husband slide into caricature. The cameo of Alexander Naysmith, the painter to whom we owe the portrait of Burns we are all familiar with, however, is a surprising and interesting addition.

Much of Ae Fond Kiss works very successfully: the set, strewn with pillars bearing book spines and copies of old manuscripts; a very energetic and rousing rendition of Whistle And I’ll Come To You My Lad; an atmospheric and amusing Tam-O-Shanter… there is plenty for Burns aficionados to enjoy.

The easy dismissal of a roving sexual predator as “here he goes again”, delivered with a wink and a smile, sits somewhat uneasily in the current #metoo climate and leaves many questions unexplored. Certainly, there is pathos in the plight of Highland Mary who died waiting for Burns to honour his promise, and the suffering of Anna Parks, the teenage barmaid who bore the married poet’s child, felt real. Why not allow those moments to prod a little deeper? An opportunity missed, perhaps.

The prevailing tone is a humorous one: “What am I gonnae write about?” Burns laments. “Naebody is gonnae recite a poem about a haggis, are they?” The audience’s mirth is palpable. But other attempts at humour receive a wry smile, rather than the belly laugh it would have received from a well-greased crowd in a bar.

And maybe that’s it! Maybe the works of Burns are best enjoyed in his favourite context: clinking tankards, easy smiles, no probing questions – just good simple words, and rousing songs where no-one minds if a note or two go amiss. We’ll all sing along for the harmonies in Auld Lang Syne.

“Dinnae overthink it now,” the bard may say.