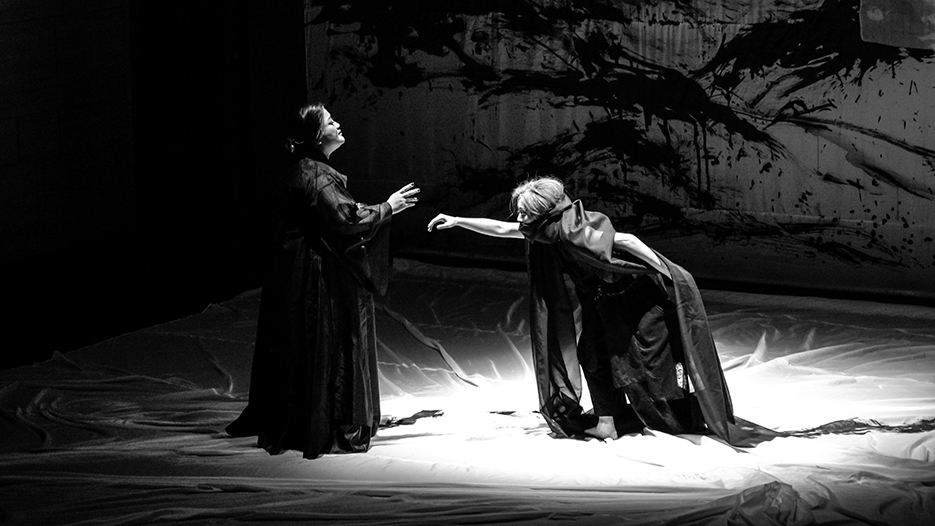 After 4: Over the Moon

Hoo Dance Company’s world premiere of After 4: Over the Moon takes place in the intimate studio space of ZOO Southside. This is certainly an effective venue for this understated solo dance work, although it does also mean there is really nowhere to hide! Choreographer Yoo Sun-hoo, has taken the very danceable story of an 80-year old’s journey of death over four rivers, her meeting with the envoys of death (very nicely represented by different musicians), and her eventual reincarnation into a flower, and produced a delicate collaboration between solo dancer and live musicians (music composed and directed by JC Curve).

The musicians are outstanding, creating an interesting fusion between jazz and more traditional music. They are relaxed and responsive, and illustrate just how important the careful choice of music (and indeed musicians) is, if a dance piece is to be successful. To structure the story (and thus the choreography) by anchoring it to the musicians is rather inspired, and works very well. There is an real interaction between the musicians and the dancer that is nice to see/hear, and would be completely absent if the music were recorded and reproduced, as is, unfortunately, so often the case.

Choreographer/dancer Sun-hoo appears less relaxed than the musicians, and this is, to an extent, apparent in the flow of her movements, which would benefit from a little more poise. Occasionally, it feels as if she is just trying too hard—over emoting—when actually, especially in this small venue, the details of the movement needs to come out and be fully controlled. When this does happen, most notably in the work’s opening, the result is beautiful.

After 4: Over the Moon has a great story, some nice creative ideas, and its well-chosen music is played by excellent musicians. Despite this, however, the choreography doesn’t always manage to hit its target. Nevertheless, an interesting work to see.