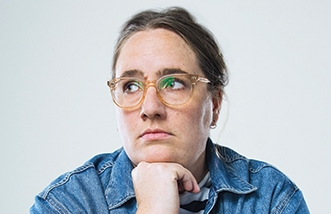 Most Fringe performers would kill to have the audience that greets Alice Snedden. The tiny cave that is Pleasance Bunker One is already full when she starts her set – and it just gets fuller. By the time everyone’s in, there are people sitting on the floor, and those of us lucky enough to be on the benches are far more intimately acquainted with our seatmates’ elbows than we ever wanted to be.

Snedden’s popularity, it quickly becomes apparent, is no fluke. From the moment she walks into the room (‘shut your eyes’, she orders us, ‘there’s nowhere for me to hide in here so I’m waiting outside to come in’), she’s instantly hilarious. The title of her show, Absolute Monster, makes reference to what she called a man in a particularly heated TV interview, and the rest of the performance revolves around her questioning whether she is a good enough person to warrant judging someone else.

There are fun references to astrology (she’s SUCH a Leo) and the Harry Potter Sorting Hat quiz, both of which Snedden has turned to in an attempt to discover herself. Beneath this levity, however, it’s clear that Snedden is grappling with who she is quite seriously, and this storyline ties the performance together very well. Along with more existential questions, she discusses recent revelations she’s had related to her sexuality, relationships, and why one should never get into the habit of playing thunderstorm noises before going to sleep.

There’s no two ways about it: Absolute Monster is a funny, poignant and cohesive show which forces you to come to terms with your own morality and judgement. No one’s perfect, but Snedden’s anecdotes and one-liners comes closer than most.