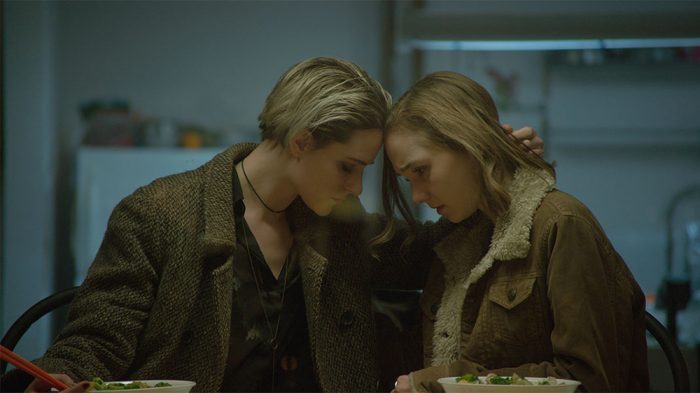 Grim drama about abuse fails to live up to its title.

A hugely committed and soul-baring performance by Evan Rachel Wood is the main reason to watch this psychological drama, the debut film from brothers Carlos and Jason Sanchez.  So intense is her work here that it stifles and engulfs this close, claustrophobic story of mental illness and abuse cycles.  She both dominates and makes watchable a relentlessly bleak, plaintive howl of a film from which no light escapes.

Laura (Wood) is a troubled young woman employed as a cleaner by her father’s company.  She meets 16-year-old Eva (Julia Sarah Stone) when out on a job.  Although a talented classical pianist, this has been imposed on her by her strict mother, and the two bond over a Nirvana poster.  An unhealthy relationship forms and Laura becomes increasingly obsessed by the girl, with the trauma she suffered as a girl surfacing as manipulation and psychological abuse against Eva.

Abuse and the scars it hews into its victims is a difficult thing to depict on screen.  Psychological damage is often depicted through over-the-top performances, screenplays that veer into exploitation, or a belief that to insert any levity or sense of fun into an exploration of that topic will appear insensitive.  This final trap is the one into which the Sanchez brothers have stumbled with their debut.  There’s an almost dispassionate sense of balance in Allure that neuters most of its dramatic punch.  There is scope for a brave, controversial take on difficult themes here.  It’s heavily implied early on and confirmed later, that Laura suffered sexually at the hands of her father (Denis O’Hare).  He has bought her a house and keeps her on at his company despite her volatility, through a toxic concoction of guilt and terror that she might reveal their history.  The dynamic is queasy, slippery and worth examining.

Similarly, the scenes between Laura and Eva are hugely uncomfortable, as they should be.  Stone has been made to look as child-like as possible; and the way in which Wood’s seduction of her is both hungrily predatory and wheedlingly needy is successful in quashing any accusations of cheap titillation.  However, with both of Laura’s relationships, there is such a devotion to being even-handed there is no energy that hauls the viewer through such a grim experience.

It’s possible to make films about tough subjects and make them not only fascinating, but to which a viewer will return for repeat viewings.  Paddy Considine’s Tyrannosaur is a fine example.  The simple ingredient is hope, and it’s a subtle, but important flavour that Allure lacks.  It’s a handsomely shot, competent debut with Evan Rachel Wood in top form, but it has a black hole of misery at its core that repels instead of attracts.