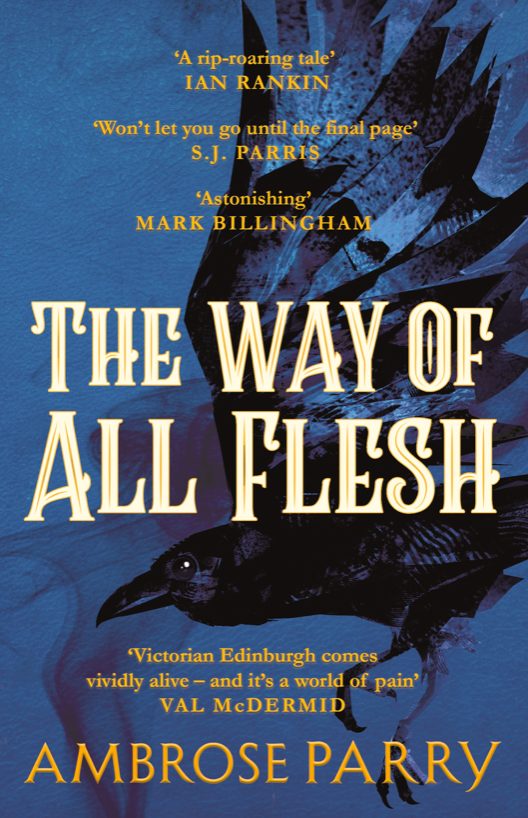 Ambrose Parry - The Way of All Flesh

Husband and wife team up to write an intriguing tale of murder set in the seedy underbelly of 19th century Edinburgh.

The year is 1847, the place Edinburgh. Will Raven is a young obstetric surgeon-in-training, working alongside Dr Simpson; Sarah is merely the doctor’s housemaid, although her intelligence is far above her station. The two characters become embroiled in the goings on of the dark, seedy underbelly of Edinburgh, as bodies begin to appear. Their mettle and courage will be tested as they race against time to uncover a murderer.

Ambrose Parry is a pseudonym for couple Christopher Brookmyre and Marisa Haetzman. The former is a novelist, the latter an anaesthetist. The collaboration adds an interesting dimension to the storytelling. While the narrative seems like it is written by one author, both influences are clearly visible. The speed with which the story picks up steam and the developing character arcs are Brookmyre’s style. Haetzman’s contribution is in the detail of how medicine evolved – from the suffering of amputations without anaesthetic, to the complicated birthing stories. The sheer detailing of the patients’ emotions as they suffer through surgeries is sobering.

The Way of All Flesh is an excellently written book on many counts. The first is that it is very well researched – from the accuracy of cases to the layout of Edinburgh at the time – the detail is spot on. The novel also touches upon a number of sub-themes: the role of women in society, medical advancements of the era, and also the setting of a major scientific breakthrough, all of which allow the reader’s attention to meander just enough to distract from the obvious. The relationship arc of Will and Sarah has a nice culmination to it and the style of writing is lucid, fast paced, and thoroughly entertaining. The vocabulary draws on nineteenth century language, without becoming dense or obscure.

The story could have ended in a number of ways, with the fate of the murderer taking centre-stage. That the authors have chosen one over all others isn’t as important an outcome as the overall plot line. And in that, the novel succeeds in setting an excellent tone for other books to follow in this series. There is certainly enough to keep readers guessing as to who we might encounter in future books.