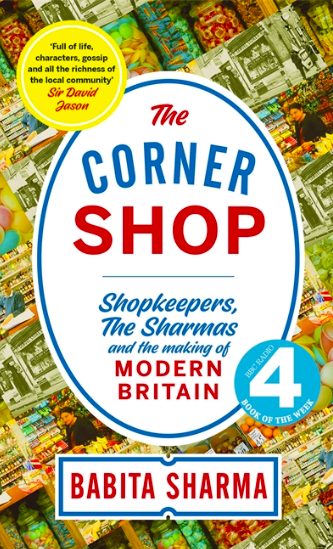 A memoir rather than in-depth analysis of that British institution - the corner shop.

Somehow the corner shop seems, like the pub, a uniquely British institution. Napoleon called the English “a nation of shopkeepers”. Even by the 1980s some old-fashioned corner shops remained. They had big red ham slicers on the counter, goods behind glass and brown paper bags. Try as they might the rise of the supermarket has not completely vanquished the corner shop. But, minimarkets, Tesco Express and Lidl, have all forced the corner shop to reinvent itself.

TV journalist, Babita Sharma, grew up in Reading and her parents owned and ran a corner shop. Some of her book details the history of Britain’s love affair with the convenience store and their fluctuating fortunes but the bulk of the book is about her and her family’s experience operating a small shop that sold everything from cat litter to newspapers. There’s little triumph or tragedy here but as an everyday story of everyday folk it is certainly one worth telling and told engagingly.

The turf war with the rival shop on the opposing corner and the menacing skinheads and casual racism of regulars who talk blithely of the “Pakis” are challenges that seem relatively easily overcome. “Paki” is not only an offensive term but also inaccurate – the majority of Asian shopkeepers came from India or Bangladesh or were Asian refugees from countries in Africa like Uganda. Even when the Reading Rock Festival is on and the shop has an influx of metalheads it is dispensed by the author in a single page. Trips to the Aladdin’s cave of the cash-and-carry were more fun for the young Babita.

For many Asians the chance of being their own boss away from the exploitative factories was hugely appealing, even if that meant long hours. The first generation of Asian shopkeepers worked tirelessly in order to put their children on a better footing academically – another reason why the ‘continental grocer’ is almost a thing of the past.

Readers expecting an in-depth analysis, as the book’s subtitle – shopkeepers, the Sharmas and the making of modern Britain – might suggest, will be disappointed. The death of the high street, the rise of discount players like Aldi and the dangers of “Tescoply” are all touched upon but in little detail. And maybe there’s too much emphasis on the corner shop’s dubious role as a linchpin in community cohesion. However, as a memoir about growing up the daughter of corner shop owners, the author is on firmer ground.