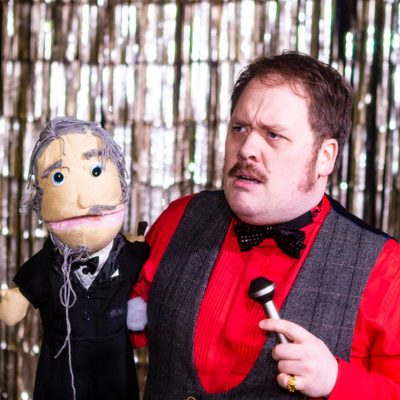 As we descend into a blacked-out room waiting for the show to start, Richard Hanrahan is milling about casually around the audience. ‘Oh, there’s someone else coming on, I’m just waiting on them getting ready,’ he says. He disappears for a moment, leaving an ethereal narration explaining that his father was actually the late Jimmy Whobblers, working man’s comic and British icon whose life was cut short before his last stand-up special aired. However, thanks to Red Dwarf-ian holographic technology, we’re able to bring him back to perform at a rambunctious night that never was, but is now.

Whobblers spills out from behind the curtain in his garish 1970’s nightclub outfit, replete with dickie bow and burst cigar, looking like the North’s own Tony Clifton. It’s an honour to come back from the dead to see so many familiar celebrity faces at his comedy special, such as old pals Les Dennis and his wife Amanda Holden, who are sitting in the front row to give us that incredibly cheesy ITV special magic. He deserves TV glory after years on the circuit, passed by for more alternative acts with likeable personalities. His one-time ventriloquist act Little Jimmy makes an cameo appearance, calling him out on his shoulder-rubbing nature and reminding him he’s destined to be a failure in the eyes of the British entertainment industry.

After getting his start in working men’s clubs and unions across the country, Jimmy found himself branching into variety and light entertainment programmes like It’s a Grapefruit!, grabbing unsuspecting members of the audience to participate in an edition of his quickfire gameshow. He throws you some bad jokes every so often, in the appropriate manner of a tired one-liner act, but they’re buried under layers of near-incoherent rambling about the highs and lows of his career. There’s an element to the show that makes it quite difficult to describe in retrospect, because it’s so pants-wettingly, chair-fallingly funny. Large parts of the show are a blur because you’re being hit with so much material, all of it hilarious, and none of it slowing Whobblers down.

There’s something very endearing about Whobblers’ stories about an England that might only exist in the mind of the deluded. When talking about a very outdated English life, he doesn’t need us to know much about these actual old unions and comedy clubs, because he’s emulating only the parts of them that make them funny. Looking back, only the animator David Firth was ever really able to win us over in the same way with his bizarre and dark observations on life in Yorkshire. Richard Hanrahan has used British comedy institutions that we have taken for granted to create a character so incredibly silly, funny and loose that it comes close to Partridge levels of comedic genius.