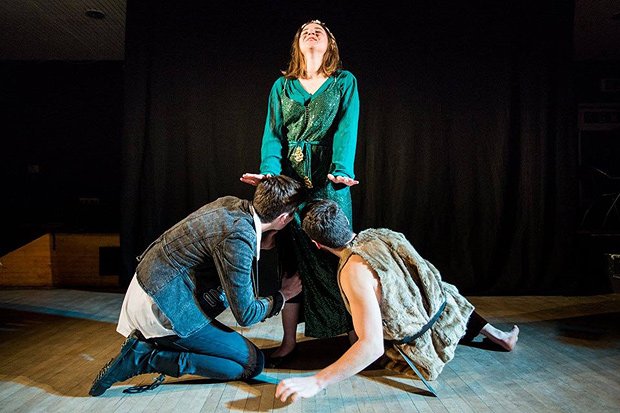 Angels in Erotica tells of God’s attempts to rejuvenate his popularity and spread joy by turning fan fiction enthusiast Rachel into the new messiah, allowing her to turn all of her fantasies into reality at a stroke of her pen. This plot device made us wonder what would happen if we were granted similar powers. Thirteen hours and several boxes of Kleenex later, we came to the conclusion that for the love of everything that is good in the world, this is something that should never be allowed to happen.

Rachel however, with Cupid as her guide, spends most of the time using her powers to place herself in a Twilight style love triangle, conjuring up a couple of boy toys to meet her every whim. The jokes come thick and fast, so the fact that not every one hits the mark is mitigated, as if you don’t like one of them, there’ll be another one along in a couple of seconds that might tickle your bits more effectively.

There are some moments that are genuinely very funny. Unfortunately a lot of the jokes, whilst amusing, are a bit on the obvious side and most of the cultural references are at least a decade old. However, the material is elevated by a mostly talented cast that are clearly enjoying themselves throughout and display an enthusiasm which, like our most recent test results from the GUM clinic, is infectious. Their energy levels lift the script like one of those little blue pills you buy in pub bathrooms and, whilst it won’t be the most original thing you’ll ever see, there are enough interesting ideas that, like so many other things in life, could become a lot more satisfying with some additional vigorous polishing.