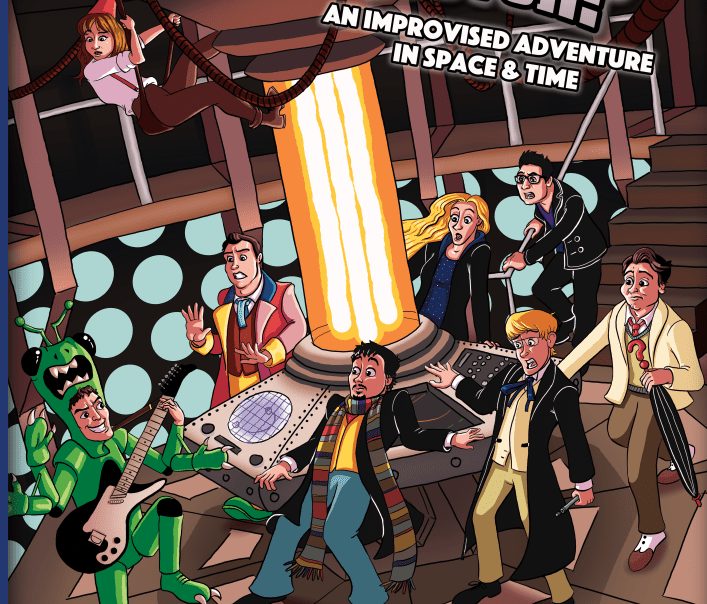 There’s a special thrill to watching an improv show, perhaps because the risk and danger is more obvious than it would be in a scripted show. When it all comes together it’s glorious – a magic trick that’s no less impressive just because you can see exactly how it was done. Any Suggestions, Doctor? sometimes achieves those glorious moments of collaborative sorcery, but just as often the spell fizzles out. It’s hard to keep an improv plot on track – and draw it all in to a satisfying resolution – at the best of times. It’s even more of a challenge when the theme is Doctor Who, and wibbly-wobbly timey-wimey complexity is the order of the day.

The concept behind Any Suggestions, Doctor? is great, and the potential it holds is immediately obvious. We start by choosing our Doctor from the cast of six – this afternoon, the audience choose Louise Jones – and, after quickly grabbing the audience suggestions for the improv holy trinity of ‘location’, ‘event’ and ‘show title’, we’re off. A nice addition is the live soundtrack of music and special effects, which runs throughout the show. It’s never intrusive and really helps add to the ‘Doctor Who-ness’ of it all.

This isn’t a show for dyed-in-the-wool Whovians. Knowledge of the long-running BBC Sci-Fi show is rarely an advantage, and the cast are obviously aware that audience will not all be literate Gallifreyans. They almost never fall back on insider jokes, aside from the obvious cultural touchstones of ‘Daleks look rubbish and aren’t very scary’.

The pace is fast, and none of the performers allow the scenes to drag for too long. A knowingly crap Doctor Who title sequence at the start gives some good early laughs, as does the inventive use of props. Some of these – plungers and kitchen whisks for the Daleks – are a given, but there’s clever use made of other props to simulate the traditional Doctor Who monster-of-the-week. Today, it’s a plastic sword and a fancy dress wig to represent “a mosquito the size of your head”.

The Sweet Grassmarket venue is a large room by Fringe standards, with a big stage. The cast make good use of it for the most part, although there’s a general enthusiasm for directionless pacing which is distracting. They’re a good team, and they work well together. Not every scene is a winner but there’s enough quick thinking and clever jokes, particularly from Jones and from Lewis Dunn, to carry the show along happily. Even if the eventual plot resolution and leaps of logic only work if you don’t think about them too much, well … what could be a more accurate tribute to Doctor Who than that?