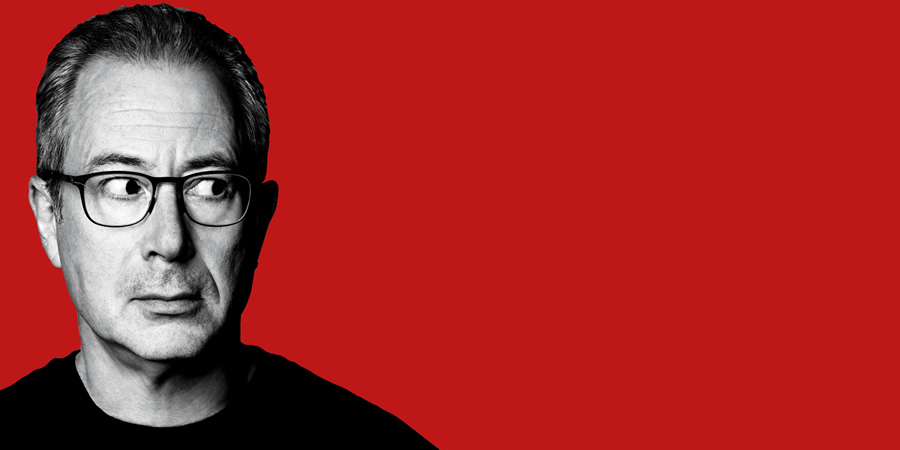 Ranty bane of the Tories is still very entertaining, if a little unquestioning these days.

That’s the angle Ben Elton is going for in his first tour for 15 years – an it’s-all-so-confusing older man’s tale of how the better world he thought he’d become part of – or, in some cases, he claims, helped create – has now shifted again. All the certainties he felt he was fighting for have been tossed in the air by the younger generation. Sexualities are fluid. Genders are multiple. And Elton doesn’t get it.

Only this being Ben Elton, old time leftie firebrand, he does get it. Or rather, he’s been happy to take on board whatever he needs to in order to be seen to get it. He doesn’t mind being an out of touch old fella about some things, as long as it’s not politics.

This results in a strange contrast to tonight’s show. With anything political – #metoo, for instance, or transgender issues – he’s at pains to remain impeccably right on, even if that means accepting what people tell him to think and disengaging his inner sceptic. But with anything non-political – craft beers, rap music – he’s happy to pull the full Clarkson ‘world’s gone mad’ routine and rant away.

So in his opening remarks – basically a series of disclaimers about what it’s ok for a middle-aged, middle-class white man to say these days – he teases us that he’s about to do something mildly provocative. And then he doesn’t. Instead, he settles for a safe clapter line about men needing to listen.

But come the routine about modern food, he’s foaming like the Daily Mail. Those fancy IPAs, eh? What’s wrong with a good old fashioned lager? ‘Sourdough bread?’ he intones, like Peter Kay about the garlic variety. As for his claims about not getting rap music, they are not only old hat, but with references to Missy Elliot, Eminem and My Neck, My Back, knocking on twenty years out of date. Even the Mail would reference Stormzy.

Elsewhere, he declares his OKness with biological men becoming women and vice versa (albeit via clapped out stereotypes about driving and stacking the dishwasher). But then he opens his second half routine about sexuality by claiming he’s straight because he’s sexually attracted to people with vaginas. That’s not how it works, Ben. Under the new rules that he’s been so quick to adopt, you can get called out for calling yourself straight, unless you also like trans women with penises.

Therein lies the show’s weakness. He’s not at the coalface anymore, in the heart of these debates. There’s a world of difference between accepting the basic principles behind the woke revolution and accepting without question every credo that emerges from it. Right now, we could use a comedian brave enough to wade into that murky water and pick things apart without fear of either side. Elton isn’t that man. Nowadays he accepts, he doesn’t question.

And no wonder he doesn’t want to rock any boats. He’s rich, secure and comfortable; the only thing at stake for him is looking old and out of touch, which means he can survey these debates from afar and simply pick the ‘right’ side to maintain his cred. He’s not had to forge his opinions in the white heat of social media, nor build a career in the current climate of cancellations and suspicion.

As a result, he repeatedly fails to interrogate his subject matter very deeply. He’s cynical about the Tories’ embrace of LGBT issues, for instance, believing it to be a distraction from their continued shafting of the poor. But that’s an easy win. Boo! Hiss! Tories! He doesn’t dare submit the BBC’s adoption of wokeness to the same scrutiny.

Yes, it is very funny the way he acts out the sex scenes from Gentleman Jack and acts mock-shocked that this is now Sunday evening fare on Auntie Beeb. But he’s entirely in favour of it, and doesn’t question the BBC’s late and evangelical conversion to all things diverse, even if it’s arguably done for the same insincere and transparent PR reasons.

Why is it OK for the Beeb to woke-wash themselves but not the Tories? Has he not drawn the connection between the finger-wagging censorious BBC of old and the preachy, hyper-woke BBC of now? Same old establishment, trendy new clothes.

There’s simply nothing counter-cultural about Ben Elton any more. He is doing what Chris Morris called this week “a display for the court” and getting “slapped on the back by the orthodox elite”. This is, for all its pretensions to being a bold and sweeping state-of-the-nation address, fairly safe material for a pliant audience. He gets applauded simply for telling Cameron to fuck off.

And yet, he is still a top-class performer – brash, animated, impossible not to listen to and very funny. For all the rap references are old, his routine about what millennials will be like in nursing homes is hilarious. So too his acting out of what he can get up to in bed while his wife is distracted by her phone. His Borisims are good, he does a great throwback to what Tomorrow’s World would have been like if they’d seen the real future, and he adds some heavy but very moving material about his father’s decline from Alzheimer’s (whilst also urging us to patronise the Queen’s Hall Bar to drink some years off the end of our lives).

So, yes, fifteen years on, Elton has still got it, if ‘it’ is the ability to get Guardian readers clapping to politics amid frequently funny observational skits. It’s an impressive performance that covers all bases of modern societal conflict, bar race. If only he wasn’t so content to just accept new orthodoxies rather than probe them.