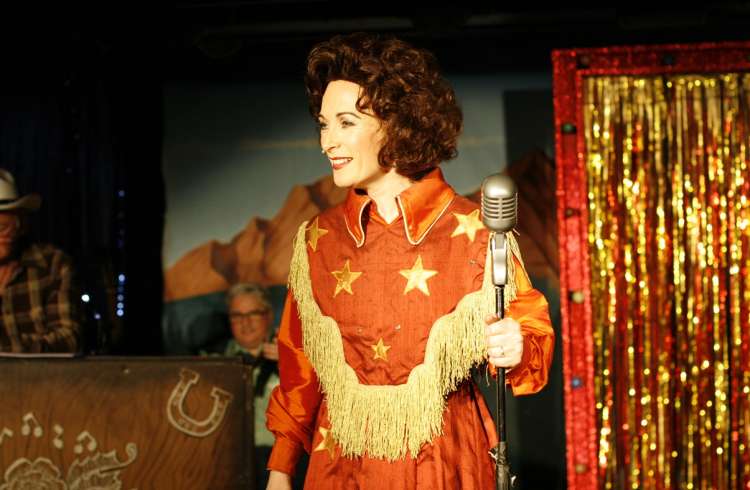 A Bottle of Wine and Patsy Cline

This is the big Christmas show at the Gilded Balloon’s new year round venue, the Rose Theatre, and it definitely appeals as something a little different from your traditional Christmas fare, the sort of show where you could round up a few friends, grab a bottle of wine, and enjoy a wee singalong if you were so in-Clined. Having played at Oran Mor several years back, this is its Edinburgh premiere.

Much of it is played for laughs, despite the poverty, the marital troubles and the death premonitions that haunt Cline’s life story. Gail Watson, who played another country gal, Dolly Parton, in Fringe hit Doris, Dolly and the Dressing Room Divas is an engaging Patsy, and has the audience warming to her immediately.

Watson plays Cline as stubborn and wise-cracking, putting her foot down over song choices and back-chatting managers, promoters and her own mother. She chats to the audience as friends, letting them in on the inside track of her life. Watson is a total pro, even working a failing microphone into her patter, which all aids the conviviality. Melancholy is never far away of course, but the music often does the talking on that score.

Supporting cast Sandy Nelson and Hannah Jarrett-Scott are put to work on a wide range of characters and both are able assistants. Nelson plays a range of svengali figures, including a disturbingly Weinsteinian gatekeeper who wants to take young Patsy back to his hotel room to “stretch her vocal cords”. Whether a recent script addition, or just coincidence, it’s scarily topical. Jarrett-Scott can also portray a very convincing Texan bloke, and gets called upon to don the ten-gallon and talk down to Patsy on several occasions too.

The pair, led by musical director Hilary Brooks, also act as backing musicians and harmony singers to some lovely vocal performances by Watson. Cline’s repertoire contains some beauties and it’s good to hear them getting an airing. The phases of her career are signalled by costume changes, and her transition from cowgirl country to pink chiffon pop with Walking After Midnight is a particularly effective closer to the first act.

Inevitably, given the similar career trajectory and sad fate, it calls to mind Buddy, and many of the usual tropes of biographical musicals are detectable – the radio news announcements, the concert hall MCs, the recording studio reworks. But it feels fresher than a lot of similar pieces and Cline’s a very worthy subject, excellently portrayed. Not for nothing do they get a standing ovation on this opening night.