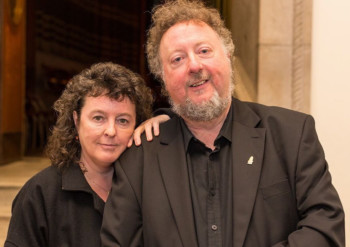 Duffy and Sampson intertwine music and poetry expertly, showing just how special the Fringe is.

A disarming ability to hold an audience

The formidable pairing of Carol Ann Duffy and John Sampson need little else then a table full of instruments, a lectern and a wig (all becomes clear later) to hold The Stand audience in raptures as Duffy reads from her wide collection of poetry and Sampson plays from a selection of historical and diverse wind instruments.

Duffy has become a poetic icon, taking poetry to the masses in the years preceding and following on from her Poet Laureate role. And she begins her readings from one of her most well-known collections, The World’s Wife. She explains how each poem is written from the perspective of a woman from the stories, myths and legends she heard at school, for example, Miss Havisham from Great Expectations and Anne Hathaway, the wife of world famous playwright, William Shakespeare.

She has a disarming ability to hold an audience with her calm and controlled tone and who better to read the poetry with meaning than the poet herself?

Sampson often plays alongside these tellings, most notably at the end of their show as Carol Ann Duffy brings her emotive poem, Premonitions, dedicated to her mother, to a close and Sampson plays a beautiful rendition of Danny Boy alongside. It brings many of the audience to tears and shows just how powerful music and writing can be – particularly when intertwined.

There are moments of humour too when Sampson puts on a Mozart wig and plays a full orchestral tune on just a recorder to emphasise how deeply the Scottish Government music education cuts might bite, and when he shows the audience his cornetto to a heckle from Duffy herself: “just the one?”

It is a wonderful thing to hear poems from the voice of the poet herself and equally beautiful to hear them with music. Performances like this highlight just how special the Edinburgh Fringe really is.