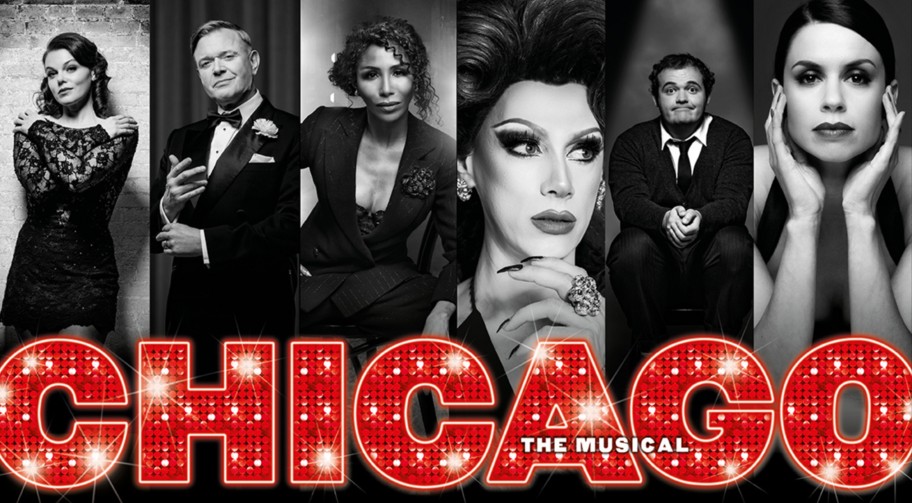 Chicago is one of those musicals that’s so sizzlingly exhilarating that you assume it has existed for ever. But while it was first performed in 1975, the show’s music and lyrics by John Kander and Fred Ebb have acquired a legendary status all of their own. A twisting, turning plot, an incredible score, plus a cast of nineteen and a ten piece band mean there could scarcely be a better way for Edinburgh Playhouse to open its doors for its first full-week run in eighteen months.

You may well know the story. A clutch of women, mostly guilty of various cold-hearted crimes, await their fate in the state penitentiary. The media, perennially interested in misfortune, swarm all over the latest bloody assassin, Velma Kelly. But her nose is left resoundingly out of joint when wide-eyed new girl Roxie Hart turns up, all breathy confusion and outrage. Will the charismatic, albeit callous, lawyer Billy Flynn be able to get both ladies acquitted?

This production features a celebrity cast. Faye Brookes as Roxie Hart, best known for her role in Coronation Street, does a nice  ingenue. Darren Day as Billy Flynn delivers a richly controlled vocal performance that perhaps lacks a modicum of charisma. Sinitta Malone, musical star and pop icon, brings a welcome swagger to When You’re Good To Mama and a lovely wistful but playful yearning to her duet with Velma, Class. Davina de Campo, possibly best known from the first season of RuPaul’s Drag Race UK, is great fun as the sanctimonious Mary Sunshine – though her ‘unveiling’ feels a bit gratuitous.

The better acting comes from the less well known cast. Joel Montague is hopelessly captivating as the forlornly overlooked and long-suffering husband of Roxie. And Djalenga Scott is a commanding Velma, entirely credible as her haughty arrogance tips into desperation at the thought of missing her moment in the sun.

The choreography is a bit of a puzzle. The dancers do a phenomenal job of evoking all of the trademark kicks, flicks and arrays of arms that are some of the hallmarks of Bob Fosse’s iconic style, but neither Velma nor Roxie are given terribly exciting dance routines. There’s a fair bit of them gripping ladders on either side of the proscenium arch, but these moments only serves to hamper their movement.

This is undoubtedly a touring production. The set does a brilliant job of housing the band, all perfectly visible and centre stage throughout. But despite best efforts with the ladders, this leaves the ensemble and actors alike crammed into the front section of the stage for most of the production. While it makes for effective group work, it does limit their range. Tonight’s performance was their first night in this venue, so some of the bunching of people is likely to sort itself out over the next couple of days so don’t let this put you off. The band themselves are phenomenal: suitably sexy horns, a double bass, a set of drums, a piano and even a mandolin. These guys are class.

Overall, this is a vivacious production of a fabulous show. If you’re being pedantic, it lacks a tiny bit of stardust, but this audience’s partial standing ovation at the close, suggests they didn’t care one bit. There was a beautiful moment at the start of the second act with the band’s act two equivalent of an overture. Musical director Andrew Hilton entreated them to stand as they reprised some of the hero tunes and, with a collective metaphorical wink to the carefully masked audience, they leap to their feet and deliver a joyous serenade to live music, live theatre and All That Jazz. It’s ever so very good to be back.