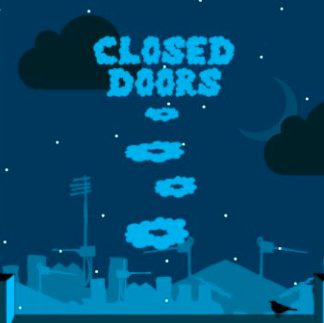 Closed Doors is a tiny slice of life and a statement about the state of our society, all in one. Sami runs a saree shop in a multi-cultural neighbourhood in Glasgow along with her mother, Amrita. When the police cordon off the street and evacuate the residents while investigating potential explosive devices, two unlikely visitors seek shelter from the cold in Sami’s shop. Maggie, who’s lived her whole life in the street, and Esmerelda, a Roma lady who lives on the same street with her sons and their cousins. The ensuing conversation exposes the clash of cultures that can exist even when people have lived side-by-side for a lifetime.

The story is timely and the delivery captivating. Belle Jones has written a script that’s part poetry, part rap and, working with local music producers, Novasound, part song. Lauren Gilmour accompanies her on the keyboard and with vocals. Audrey Tait is on drums and percussion. But this is a yellow brick road of a girl band with a brain and a heart and a bucketful of courage.

Jones is a charismatic performer. Amidst a simple set, she inhabits each of the characters in the street scene effortlessly. With only a microphone as a prop, she stalks the stage, evoking the innate hostility of each character, underpinned by an inability to understand the other’s circumstances. Gilmour too has a beautifully versatile voice, varying her tone and timbre to support the story. The music weaves in and around the storytelling, artfully evoking the agitation and the anger of these people from different places, now living next door to one another.

At times, the performance is accompanied by visuals by Kim Campbell that imitate a Glasgow street. They’re simple but evoke the curiosity inspired by a closed door. But it is the words that are the hero in this show. Expertly delivered by the cast, this is an aural feast. The whole homegrown show is poetry with a carefully orchestrated soundtrack and a point that unfortunately still feels disappointingly topical.