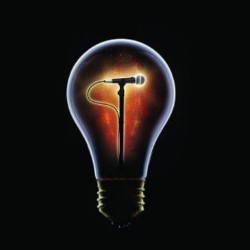 Comedy in the Dark

Uneven stand-up in the shadows

There’s something more intimate about the dark: even a fairly large audience in a mid-size venue suddenly feels like a tight-knit circle of pals, all gathered to chat with our host for the evening Tom Toal about a random assortment of topics: Australians, failing your exams and pilots. After this cosy conversation, Toal explains that we’re going to see three comedians, all of whom have their own shows in the Fringe, each do a brief set for us in the pitch black room.

The first comedian in the lineup is Isma Almas. Almas seems like a genuinely lovely person, but there’s something about her intonation that makes her jokes feel like a bedtime story. This makes her quips about taboo topics such as FGM fall a little flat, but when she sticks to slightly safer topics, such as her namesake, there are plenty of laughs. Although her current Fringe show About a Buoy – Adventures in Adoption has received positive reviews for its heartfelt message, her set here is comprised mostly of one-liners; some work, some don’t. She’s endearing, though, and it’s easy to imagine her being consistently witty in a different context.

John Hastings, star of the eponymous 10 John Hastings I Hate About You, is the next comedian to make his way onto the darkened stage. He is the only one of the trio who fully uses the darkness as a comedic prop. Although he bemoans the very concept of the gig (“this is always horrible, I don’t know why I agreed to it”), he has some nice repartee with the hecklers who are emboldened by the anonymity, and complains constantly about falling offstage. His set consists of him stopping, and starting, three different pieces of material in quick succession as he distracts himself with tangents, but his dry delivery and occasional reminders to imagine him as beautiful and very naked are enough to keep us hooked.

Hardeep Singh Koli is our last act, and unfortunately stands as the weakest of the three. Despite his veteran Fringe status, his set is meandering and incoherent. He describes his sexual exploits in unnecessary detail, complete with moans (this would be toe-curling at the best of times, but the added intimacy that darkness brings takes it to a whole new level of discomfort). He doesn’t particularly endear the audience to him, either – if his jokes were truly as funny as he keeps telling us they are, we would’ve laughed at them.

The idea behind Comedy in the Dark is interesting: remove a comedian’s ability to gauge audience reactions, remove their body language and facial expressions, and make them rely solely on the quality of their material. There’s no doubt that the performers tonight are talented comedians when they’re on their own stages, but the only real shine in this gig is from an iPhone torch that’s been turned on by accident.