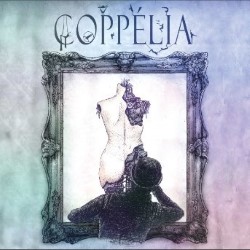 Dr Coppelias longs to bring his most wonderful creation to life in this theatrical take on the classical ballet, Coppélia, where a mad inventor builds and bewitches dolls to move as he wishes.

For lovers of the original ballet this is a whirlwind retelling containing circus acts, eclectic dance styles, film and poetry by The Feathers of Daedalus Circus who debuted at the Edinburgh Fringe last year. Sticking closely to the company aims this second run at the Fringe creates yet another abstract adaptation of a traditional story and transforms it into something new and contemporary. There are impressive acrobatics from Peter Shirley and Gabbie Cook as Franz and Swanhilda, the former becoming entranced by the doll, Coppélia; the strength and suppleness of the dancers is at times extraordinary but it is the poetry by Sophie Leseberg Smith which runs alongside the performance that is perhaps the most memorable feature of the production. That, and the intriguing narration by Joanna Vymeris, the innovative young director and producer of this fledgling company.

The Palais du Variete is the perfect location for the action-packed show allowing dancers to enter the stage from all angles with the audience surrounding them on all sides. At times, however, there is too much going on at once as people try to watch film and background action while dancers perform centre stage and others are in the air. People are not sure what or who to watch and would prefer too, to watch the interesting snippets of film which roll the story along on the big screen. Perhaps this was the intention and it just didn’t come to fruition at this particular performance.

Despite this the performances are entertaining and the construction of the show intelligent. It is early days for the company but they have started strongly and can use this as a platform to build from for next year.