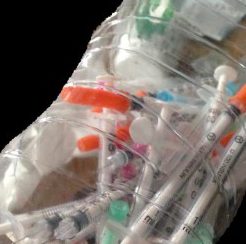 A well-acted, if slightly derivative tale of one young man's struggle with drug addiction.

This play about drug addiction focuses on the struggles single mother Miss Warden faces in getting her addict son Ryan appropriate treatment. However, conflicts between Ryan, Miss Warden and his nurse Clive, threaten to end his rehabilitation. Present-day scenes involving Miss Warden, Ryan and Clive are intercut with flashbacks showing Ryan’s descent into addiction as a result of being introduced to drugs by his best friend, Simon.

The overall performances from the cast are strong, with the actors portraying Ryan and Miss Warden particularly strong in conveying the internal and external struggles that both characters undergo in their arguments regarding Ryan’s rehabilitation. Likewise, the actor playing Simon impresses with his emotive performance, especially when the character opens up about his mother’s own addictions. The only weak spot in the cast is the actor playing Clive, whose slightly rushed and wooden delivery somewhat undermines the effectiveness of his character.

The script tells a straightforward narrative about Ryan’s spiral into addiction and his mother’s fears for him, the only unique aspect being the dialogue sequences between Ryan and Simon whilst the former is in rehab, following a narrative revelation about Simon.

The dialogue convincingly portrays Mrs Warden’s concerns about Ryan and Ryan’s initial teenage naivety which turns to anger and resentment towards his mother and Clive. Some of Mrs Warden’s dialogue about Ryan’s growing drug use, however, comes across as overly didactic about the dangers of drug addiction and bears greater resemblance to a public service announcement than realistic dialogue for the character.

Despite this criticism, Crack/ed is a well-acted drama about the effects of drug addiction on a mother and son that although has a slightly derivative plot also manages to convey the struggles of the addict, family members and rehab clinics in dealing with addiction.