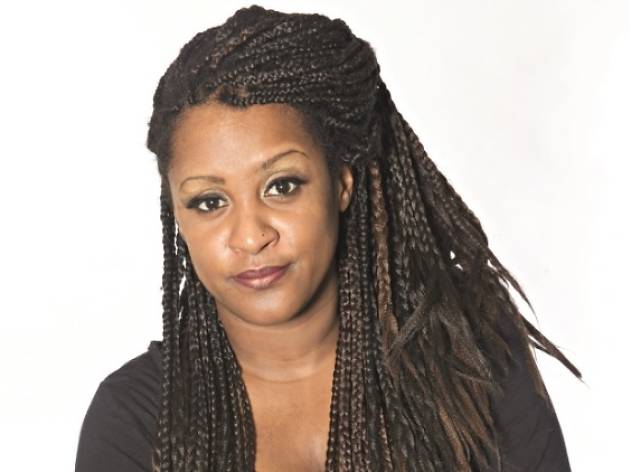 Lack of audience participation scuppers a show that hinges on it.

Sometimes, when a performer has won over a room it seems like they carry the crowd with them effortlessly on the crest of their own self-generated wave.  It’s easy to forget just how difficult it is to generate that momentum.  It’s always jarring therefore when, despite the best efforts of the act, they hurl themselves into every joke, only to smash against a wall of indifference as hard as concrete.

Sadly, that’s what has happened to Dana Alexander.  She’s by no means a Fringe debutante.  The Milk is Not Free, But Sometimes it is On Sale is her fifth show, and experience will have informed her decision to hang her hour around audience interaction.  She’s just been utterly hamstrung by the crowd’s refusal to engage for the most part.  Every question she fires hits the wall, and she never manages to chip through the defences.

To her credit, the genial Canadian doesn’t appear phased.  Beyond a noticeable shortening of the time she lets a joke bed in before leaping to the next one, she admirably continues to plough her own furrow.  It is material she’s honed and has undoubted confidence in, and in front of a more appreciative audience it works.  As a guest on the live recording of the Guilty Feminist she was at ease, and a few of the same jokes she presents this evening found their target, which led to some anticipation of a full hour in her company.

Perhaps her boisterous delivery, and her chummy, effervescent personality will find their mark with a more lubricated weekend crowd more inclined to join in.  It’s not as if her material is niche; focussing on dating, the process of ageing, the decision to have children, and the achievability of life goals.  There’s universality to her material that should have no difficulty in finding a connection, and it’s a shame we’re denied seeing it firing on all cylinders.

A little more time spent on each topic may have done more to warm up the frigid crowd.  Once the chilly mood’s been established she rather hops from one subject to another.  Also, the promise of some “really filthy shit,” directed at the one girl who has really shown any sign of engagement fails to materialise. Instead of the increasing number of verbal shrugs she gives as the hour progresses, she should have really gone for broke and taken it into more extreme territory.  Finishing with the gloves off and the sleeves rolled up may have ended the evening on a pleasing note of defiance.

Despite not getting a real chance to find her wings, a comedian can only work with what they’re given; and for whatever reason, Alexander never manages to overcome the obstacle of an apathetic crowd.