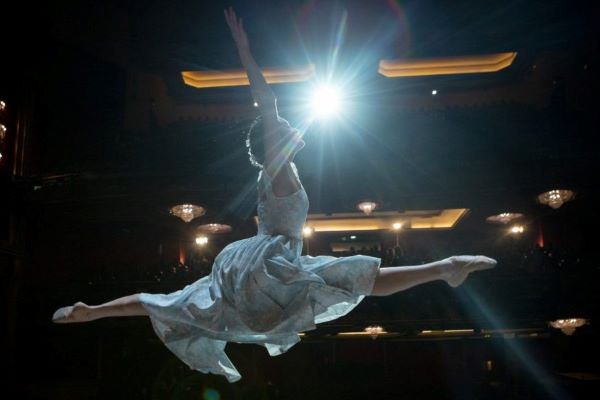 A high stakes drama set in the world of ballet

Dancing on Glass is Writer/Director Jota Linares’ second feature for Netflix. A high stakes drama that opens with ballerina Maria dancing the part of Giselle. She performs on a skyscraper roof, to the backdrop of the New York skyline, before stepping off the edge. The story of Maria’s suicide haunts the film. Mona Martinez plays the ballet supremo whose perfectionist regime is blamed for Marie’s death.

The plot explores the obsessive friendship which develops between two outsiders: the new Giselle, Irene played by María Pedraza, and the introverted Aurora played by Silvia Kal. The viewer is drawn into a paranoid realm which seems to be the chosen filmic perspective of ballet; a world where dedication is marred by the desire to destroy any rivals. Their rival in both ballet and reality is Olivia Baglivi who everyone expected to play Giselle. Although Aurora helps Irene to realise her potential, their relationship is potentially toxic.

Tonally, this is in the realms of Whiplash and Black Swan. There is no shortage of beautifully performed ballet, shot with great artistry, but there is a lack of originality in the themes. Irene is bulimic and misunderstood by her family. Aurora has a mother whose own ambitions were cut short so she throws her dreams onto her daughter. After one date, Aurora harasses the leaflet distributor, played by Fernando Delgado-Hierro. Her subsequent heartbreak echoes the story of Giselle. Despite the familiarity of content, this is a compelling psychological drama taking the characters to the edge of obsession, while surprising with revelations from the backstory.

The title refers to the two women, in a moment that expresses the depth of their friendship, performing their experience in dance on what appears to be a lake of glass. This image is repeated at the close of the film which leaves a somewhat ambiguous ending. As the final Isadora Duncan quote reminds us: ‘If I could tell you what it meant there would be no point in dancing it.’