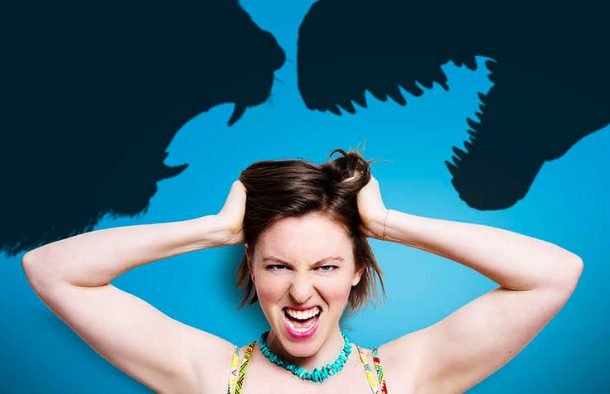 A powerful and impressive account of growing up with a disabled sibling.

In a fierce battle two ‘Dangerous Giant Animals’ fight with an intensity and energy which belies the fact it is played out on stage by just one woman, Christina Murdock, as a representation of a particularly harrowing battle she had with her younger sister which resulted in a moment of deep regret. Murdock plays all the characters in this play about her family life and most particularly about her younger sister who was born with Atypical Rett syndrome, cerebral palsy and epilepsy.

Murdock chops and changes the scenes with carefully and well-selected music to explore her feelings at different stages of her life playing her child self with all the fervour and buoyancy a young girl would portray events like being allowed to squirt cream all over the table or the happiness she feels when she is the one that can make ‘Kayla’ smile and forget her tantrum.

But there is a bleak side. Her parents’ marriage doesn’t survive, lack of a babysitter means her mum missing out on her pivotal senior recital and as Kayla gets older it gets harder and harder to control her tantrums. Beneath the bleakness though is a sister who really loves her younger sibling and a younger sibling who has in turn taught her to really live. Kayla does not care for the rules and regulations with which we govern our lives and there is a freedom to that which Christina/Claire can’t help but appreciate.

At the end of the moving solo show Murdock explains that she feels this was in some sense written in order that she understand her sister better and also to tell the untold stories of the carers of those living with disability. It is a powerful and impressive retelling of a very personal story and for those who can connect personally to the subject matter a deep understanding that this is a show which gives voice to those in society who do not have their own.