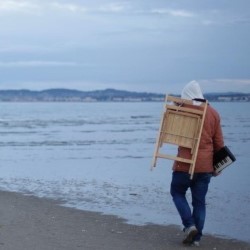 David O'Doherty
You Have to Laugh

Charming and clever offering from award-winning comedian and musician

“What is laughter, if not happy screaming?” posits David O’ Doherty, in perfect summation of the theme of his show, You Have to Laugh. O’Doherty urges us to combat the trials and anxieties of these challenging political times by embracing levity and laughing at the absurdity of modern life. He uses this premise as a springboard to address a diverse series of ideas, such as changing technology, evolution, his own fear of mice, Australian traffic cones, upturned frisbees of spare change and awkward dog sex.

Armed with his trusty vintage Cassio keyboard, O’Doherty opens with an oddly inspirational ditty, in which he implores the audience to “Get Your Shit Together”, offering suggestions for achievable, every day self-improvement, such as fixing the screws on the toilet that that have been wobbly for three years. Other musical highlights include a dispiriting imaginary conversation with his 18-year-old self, an elderly man going to ludicrous lengths to ensure his online presence will be completely eradicated after he dies, and an eventful night out on the town without a mobile phone.

The songs are all highly entertaining, but O’Doherty truly shines during the stand-up sections of the show. At 42, O’Doherty retains his signature whimsical charm, and his persona is still adorably inquisitive, wilfully naive and gleeful. But his silliness is far from empty – it belies a lively intelligence and keen astuteness. While the show is not ostensibly political, a moment of genuine joy is created when O’Doherty discusses the changing political climate of Ireland, which he sees currently as the unlikely last bastion of progress in a degenerating world.

Tonight’s performance is sold out, and it is not hard to appreciate why. “This is the famousest I’ve ever been”, O’Doherty tell us with a combination of satisfaction and self-effacing bewilderment. He cheekily suggests that You Have to Laugh is his best show to date. Given the palpable and sustained delight of the audience, the age range of which is notably vast, it appears he might be right.