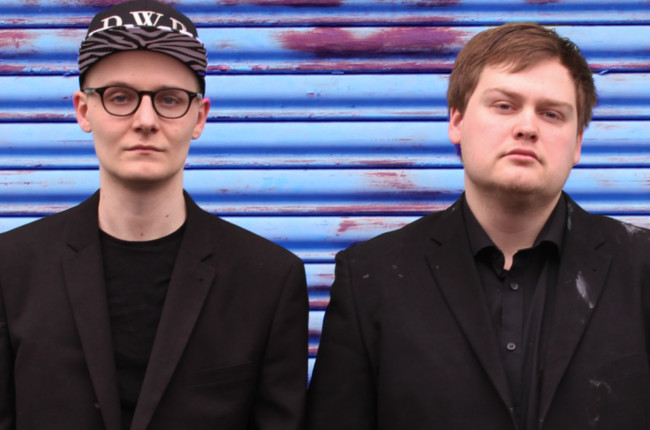 Manners is the third show from the Birmingham-based sketch duo of Chazz Redhead and Jack Robertson, Dirty White Boys.  They’ve drawn comparisons to Mitchell and Webb in the past, and as the show deals loosely with the themes of social conventions and how they can be subverted or flat-out shattered for comic effect, it’s a correlation that feels apt.  The duo favour and absurd fast-paced approach over a breakneck hour.

What is immediately apparent is just how talented the two performers are.  Both are able to launch themselves into any absurd situation with believable aplomb.  Acting chops aren’t always a pre-requisite for a sketch troupe, but Redhead and Robertson could blow many of the serious thesps here out of the water.  Redhead is a dead ringer for a young Ade Edmondson, with the rangy energy and the slight tang of dangerous unpredictability to match.  Robertson specialises in puffed-up, nice-but-dim gentlemen with unearned authority and an air of gouty constipation, but both turn their hand brilliantly to many types of characters.

Sadly, their writing doesn’t always match their undoubted talent, particularly when it comes to a satisfying conclusion to the sketches.  They begin well, with a promising scenario in which Jack fails to identify the parodically Russian Chazz as a Russian spy.  They both take the scene as far as they can go but given the intended explosive culmination, it’s ironically something of a damp squib.  The same goes for a running thread which sees Jack harassed by the very persistent ‘Guy from SKY.’  The repetition becomes very funny, but again the payoff just doesn’t satisfy.

When they do land the dismount though, the results are excellent.  Perhaps the standout is an almost unbearably uncomfortable scene in which Robertson plays a jilted pub quiz master whose estranged wife is in the audience.  There’s a poignancy here that feels like fertile new ground for the pair, even as it unavoidably brings to mind the Charlie and Stella sketches from The League of Gentlemen.  It’s another piece of brilliant acting, particularly from Robertson, as a man convincingly crumbling before your eyes.  More of this please.

Even though some of the sketches fizzle out, none really linger long enough to mar the overall experience, which distinctly pleasurable.  The sheer talent, commitment and chemistry the two men share is palpable and more than enough to haul the crowd through any troughs.  If they can add those killer payoffs to their arsenal, they’ll be unstoppable.