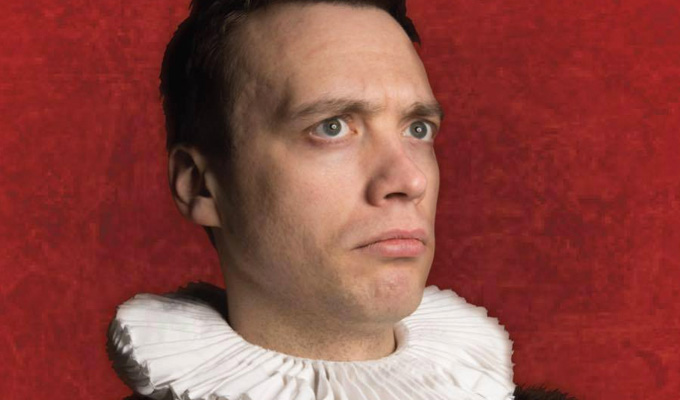 After briefly introducing himself, musical comedian Edy Hurst hits the ground running. He dives directly into a couple of very short, offbeat comic songs, settling us is in for presumably 50 minutes of madcap musical whimsy.

Initial impressions can be deceiving, as is the case here. After some funny, self-deprecating gags about musical comedy we are introduced to a ventriloquist dummy who looks like Kermit The Frog… if Kermit were a demented geography teacher.

After the dummy’s introduction, it becomes apparent the purpose of this creation is to provide a scathing commentary on the act (via a pre-recorded voice) for its lack of emotional honesty, plus to bully him into doing more autobiographical stuff.

Hurst steadfastly refuses whenever this happens. But it is clear foreshadowing for emotional content ahead. In between times, we get more delightfully silly songs, including a particularly absurd number about a robot knee, not to mention an amusing number concerning a phone call with a call centre operator (much funnier than it sounds).

There are also some cracking moments of audience interaction, most of which involve inventive use of a loop pedal, and one of which sees Hurst getting the whole crowd involved in an uproarious chorus of the Flash Gordon theme.

The undisputed highlight though is an absurd and elongated story involving a goose, a tale that involves song, flipcharts, and even a soupcon of performative dance. It is a hilarious routine that is symbolic of the playful, freewheeling nature of Hurst’s comedy and works to the strengths of his manic stage presence.

Then it happens. The emotional content foreshadowed throughout. Now, it should be mentioned that the mental health issues raised are done so in an insightful manner. Moreover, some points will no doubt resonate with many who have suffered from depression (your reviewer here included). But given just how off-the-wall and whimsical the majority of the show surrounding it is, it’s a hard left turn which feels ill-fitting. And there is undoubtedly a significant dip in the energy in the room.

Thankfully Hurst Schmurst is not entirely derailed by this bit as Hurst throws in some laughs during the emotional bit. And he does end on a high note with one last beautifully silly song.