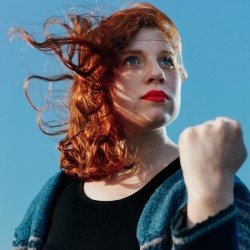 Since attracting attention with the musical comedy of her debut Fringe run back in 2014, Eleanor Morton has been steadily honing her skills. Now, as befitting a show with the title Angry Young Woman, she wants to talk about her difficult relationship with anger. She struggles with being angry and, equally, with being not angry, she says. Her confession that she brushes things aside only to dwell on them later seems to relate to her show, as much of it channels not the straightforward anger the title implies, but a witty, sardonic disarming of the targets of her ire.

Angry Young Woman has a feminist slant, but Morton moves quickly between topics, not lingering too long on more obvious issues such as the tampon tax. Clearly a fan of audience engagement, she asks everyone to participate in a game where she remakes men-centric films as films featuring women. As the audience make suggestions, Morton throws back rapid retorts. Taxi Driver? So, there’s this woman who wants to be a taxi driver in the 1970s… well, that’s not happening.

She adopts different voices with irony, and her sharply-observed, imaginary wedding speech has a couple of audience members in stitches. Today, her mother is in the audience – this could make more experienced comedians shy away from certain topics, but it doesn’t seem to deter Morton.

Explaining to the audience that she has been told to “own the space” more, she makes a show of stretching around the stage, but in fact she seems very comfortable there. She discusses experiences such as smear tests with ease, making the audience feel they are listening to a friend tell an amusing story. Morton is not afraid to discuss her insecurities, either, including how a look at how the “token woman” phenomenon in comedy has caused her to feel ambivalent towards other female comedians.

It’s a well-researched and informative hour, with some interesting facts about several important but underappreciated women in history. This might make it seem a slightly dry show, but it’s not. It’s smart, biting and funny, with an amusing if predictable twist at the end helping to tie things up.

The audience are appreciative if slightly sleepy on a Saturday lunchtime, but there are a number of empty seats. Morton deserves a fuller crowd; her charming, one-step-ahead show has been crafted with care. Here’s looking forward to what she delivers next year.