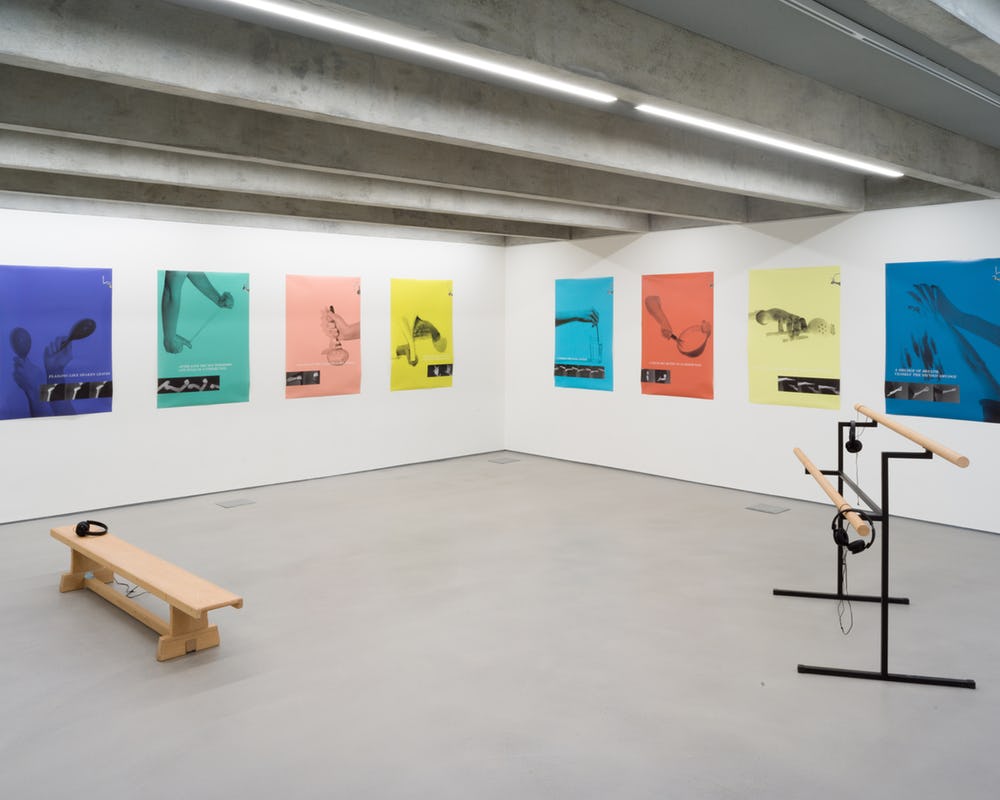 Emmie McLuskey: these were the things that made the step familiar

Emmie McLuskey’s these were the things that made the step familiar, exhibited as part of Collective’s Satellites Programme, uses a variety of media to explore the interpretation and representation of movement. McLuskey is an artist whose practice takes the form of collaborative working methods; previously having created publications, events and exhibitions with invited collaborators. Working alongside PhD candidate Freya Field-Donovan in this case, McLuskey has researched the influence of the human body and kinaesthesia on developments in technology. Adopting a research led-approach for the artwork, the exhibition combines digital print, sound, the written word, furniture and interactive elements to explore ideas such as communication as well as the creation and interpretation of meaning. Alongside this, the artworks interrogate the relationship between the subjective self and the external world.

A series of eight coloured digital prints line the gallery walls, each containing visual depictions of a particular body movement, represented again in sign language. Lines from the poetry of Millicent A.A. Graham are featured on each print, as textual representations of the attempts being made to interpret and describe movement. The furniture has been constructed for the exhibition and invokes dance classes and gym halls, while three sound pieces are used to add a phonetic component to McLuskey’s exploration of language and communication.

McLuskey draws on a range of influences, most notably the work of dance artist and theorist Rudolf Laban, whose pioneering movement analysis work paved the way for Labanotation – a notation system for dance that is now employed in fields as diverse as robotics, therapy and business consulting. This sense of diversity, of seemingly disparate elements being revealed as interconnected, is reflected in the variety of media throughout the exhibition; as well as the different modes of communication the viewer is invited to interpret. As you sit on a bench to listen to the headphones, or stand in front of the collection of reading material lined up on the shelf, you’re prompted to consider the relationship between your own body, your position and movement, and the external stimulus you’re interacting with.

Other notable influences on the exhibition include Maya Deren, film-maker, dancer and theorist, best known for the 1943 avant-garde classic Meshes of the Afternoon. Deren’s attempts to find new languages to convey subjective experience within the medium of film is reflected in some of McLuskey’s ideas. Yet it is Deren’s collaborative work towards a children’s book exploring contexts and assumptions around dance, with dancer and anthropologist Katherine Dunham, that has most directly influenced these were the things that made the step familiar. The allusion to politics and power relations made by the connection with Dunham and Deren is perhaps reflected in the title of the exhibition. The omission of capital letters conveys a sense of continuation, motion and fluidity in language, but is also suggestive of the approach to language proposed by feminist theorist and social activist bell hooks.

A new book, A Strange American Funeral, edited by McLuskey and Field-Donovan accompanies the exhibition.

these were the things that made the step familiar is @ Collective, Calton Hill, until Sun 10 Mar