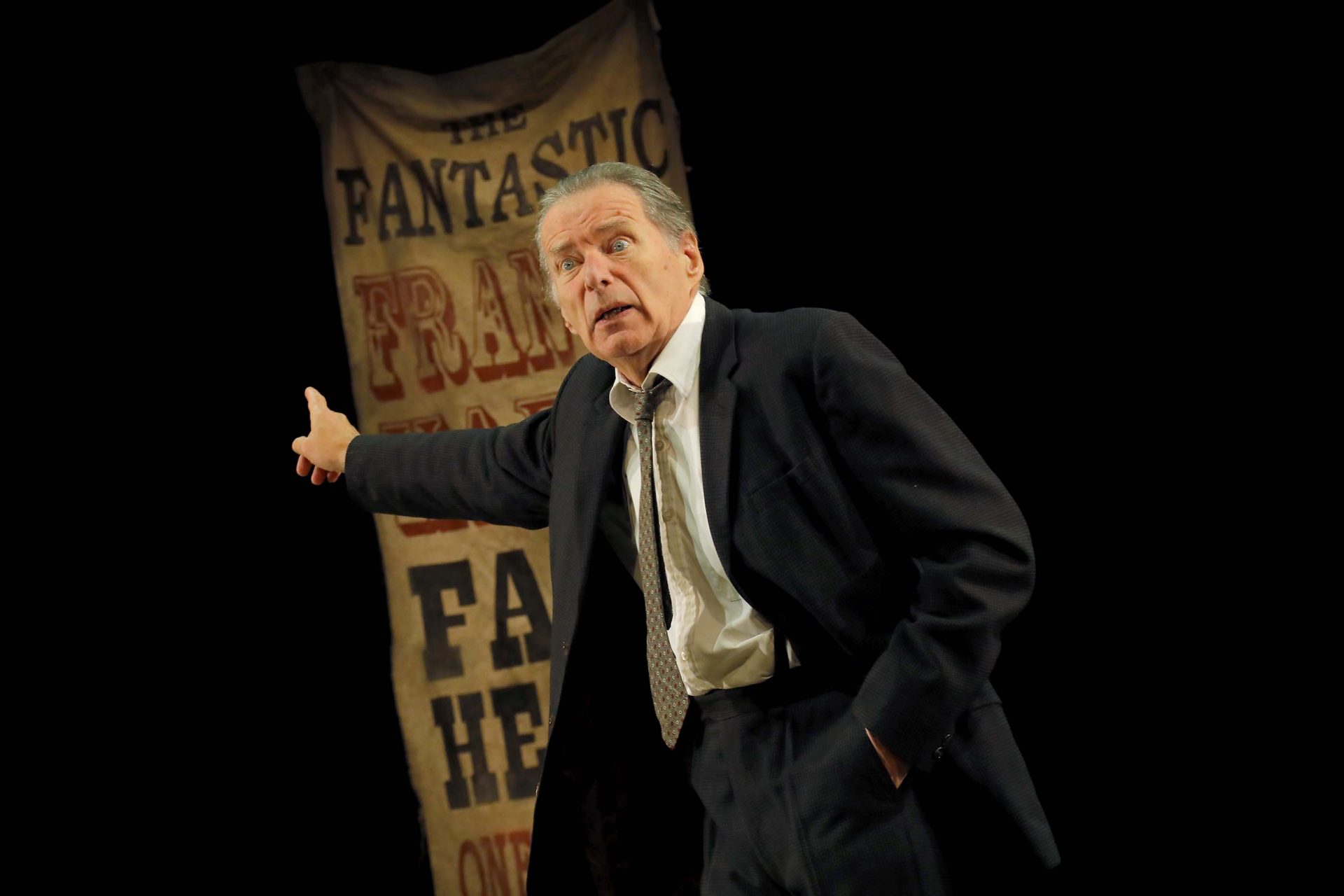 A rare opportunity to enjoy a modern classic

First performed in 1979, Brian Friel‘s play Faith Healer isn’t a production usually seen at Pitlochry Festival Theatre. Poetic but complicated, it is a work that juggles truth, realism and an alternative version of life.

Broken down into four conflicting monologues, Friel’s play recounts defining events in the life and death of the main protagonist, Francis ‘Frank’ Hardy – the titular faith healer. One by one, they are delivered on the bare stage set of a rundown village hall. Hardy, portrayed here by George Costigan, is discovered shambling around the stage recounting his version of the experiences and relationships he has lived through. His narrative involves him challenging his own faith, particularly in terms of questioning ideas of truth, reality, and how they align themselves with his own healing powers. Using arcane vocabulary – with talks of mountebanks and chicanery – he plots his way through his life. As Hardy exits, his voice is replaced by his wife, Grace, played here by Kirsty Stuart. The focus of Grace’s monologue is her version of their tragic relationship, which then closes the first act.

Opening the second half is Hardy’s ‘promoter’, Teddy, who is portrayed by Richard Standing. Witness to the intimate moments of Hardy’s personal life, he recalls the collapse of Hardy and Grace’s relationship – depicting in this a tragic still birth – while also remembering Hardy for his charismatic healing success alongside his failures. The play rounds off with Hardy returning to the stage to deliver the final chapters of his story – though there is some ambiguity over whether he lives or dies.

Brian Friel, a contemporary of Seamus Heaney, is one of Ireland’s greatest playwrights and Faith Healer is considered to be his masterpiece. Many stand-out productions have taken the stage since its 1979 debut, and to attempt to recreate their success is not a task for the faint hearted. Nevertheless, Pitlochry Festival Theatre and Eden Court’s theatre companies have risen to the challenge. Directed by Elizabeth Newman, the Pitlochry’s Artistic Director, we are given a more televisual than theatrical production. Lacking the dynamics of a straightforward drama, she concentrates on the internal musings of each character’s version of the story. This works well for Costigan with whom we feel both sympathy and revulsion, particularly regarding his treatment of his fellow travellers on his self-destructive journey. Stewart as Grace could almost be another soap-opera victim, as she recounts how her husband has impacted and destroyed her life. A special mention has to go to Standing in the role of Teddy; his performance as the ever-optimistic manager – in spite of the toxicity he witnesses – manages to raise a laugh from the audience amidst the tragedy.

As said, this is a challenging work; and yet, the audience sat silently absorbing every moment with a well-deserved ovation at the curtain call. It is a work that leaves you thinking you should buy a copy to read, so you can fully grasp the twists and turns embedded within the thought processes of each character.

Faith Healer is a production in partnership with Inverness’ Eden Court Theatre, and is hopefully the beginning of a collaborative relationship between the two theatres that will fulfill Newman’s hope of connecting with people across the Highlands. As a Highland resident myself, I look forward to more productions of this calibre coming our way.