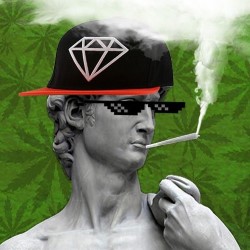 It’s hard to stop laughing during this satirical and bizarre production, although half the time you’re probably laughing from bewilderment or astonishment rather than genuine hilarity. F*ckboys for Freedom follows a modern day fuckboy and his quest to become king of the fuckboys.

If you don’t know what a fuckboy is, this play most definitely isn’t for you. That’s about the least obscure pop culture reference within the performance, although as soon as the fuckboy (James Hughes) puts on his outfit he’s instantly recognisable as the douchebag often seen in American movies. Other extremely specific references, however, could isolate those without some understanding of the culture.

At the end though the fuckboy realises he doesn’t have to a misogynistic twat and is magicked back to the real world. It’s reminiscent of the Wizard of Oz tale (obviously with very different characters), however it’s not clear until the conclusion. Polishing of the dialogue and smoother audio transitions would also up the production values; however, it’s the kind of play where a little mishap only adds to its charm.

Still, there’s no doubt this play by Pandorum Theatre Company is ridiculously hilarious. The four cast members (Jack Midgley, Debi Pirie, Emma Lynne Harley and Hughes) are delightfully funny, playing multiple characters, although Midgley steals the show. Midgley’s brilliant facial expressions, accents and fabulous entrances and exits are standout moments, however his high energy made the other three pale a little in comparison.

An hour you’re not likely to regret but be prepared for a little shock.