A shocking and thought-provoking portrayal of online media

If you’re squeamish, look away now.

Theatre Témoin presents a society whose only objective is to get your attention at any cost. It is a world where charity ad campaigns are sandwiched next to meaningless materialism and horrific stories are mined for Twitter followers. This society is, of course, our own.

The basic plot starts with a journalist who publishes a viral article using her girlfriend’s unrelated but shocking image. In response to the story, a makeup artist turns her channel into an exhibition of suffering and mutilation to grab the attention of her followers. What starts as realistic discussions between real people quickly escalates into an abstract, surreal pandemonium. The use of lighting, mime and voiceover to create adverts that were sprinkled across the hour, combined with blue tubes symbolically connecting and torturing the characters, were ingenious in creating this chaos.

The issues fighting for exposure – Palestine, foie gras and the NHS, for example – are not the real problems being addressed by the multi-rolling cast of four. It’s the exploitation of these stories for attention and a superficial shock reaction. As attention spans decrease and a taste for suffering heightens, the cast go to extreme lengths to inundate us with information and keep us watching. The intensity may not suit everyone, especially those who’d rather not see a mutilated finger thrown around a stage, but it makes its point loud and clear.

The involvement of the audience in this social discussion is particularly effective. The actors try several versions of their deliveries to see what gets the best reaction, then exaggerate that version to its extreme. This isn’t just an abstract point to make us think; it’s a direct address to the audience as active participants in a world of fake news and pain immunity. Sometimes I think this point was too explicitly explained, especially by Jonathan Peck’s character, only because the more abstract portrayals were so effective. Peck’s character was in fact the most confusing of the quartet because his motivations were harder to understand. The rest of the cast, in contrast, had clearer arcs that gave them their own personal dilemmas rather than just presenting issues directly to the audience.

This play is an unflinching presentation of the damage information overload is having on our society. It leaves no room for doubt or denial. I challenge you to handle their truth. Prepare to be uncomfortable. 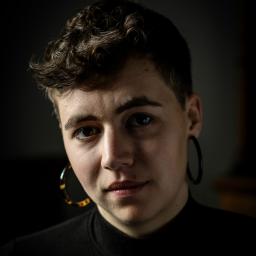