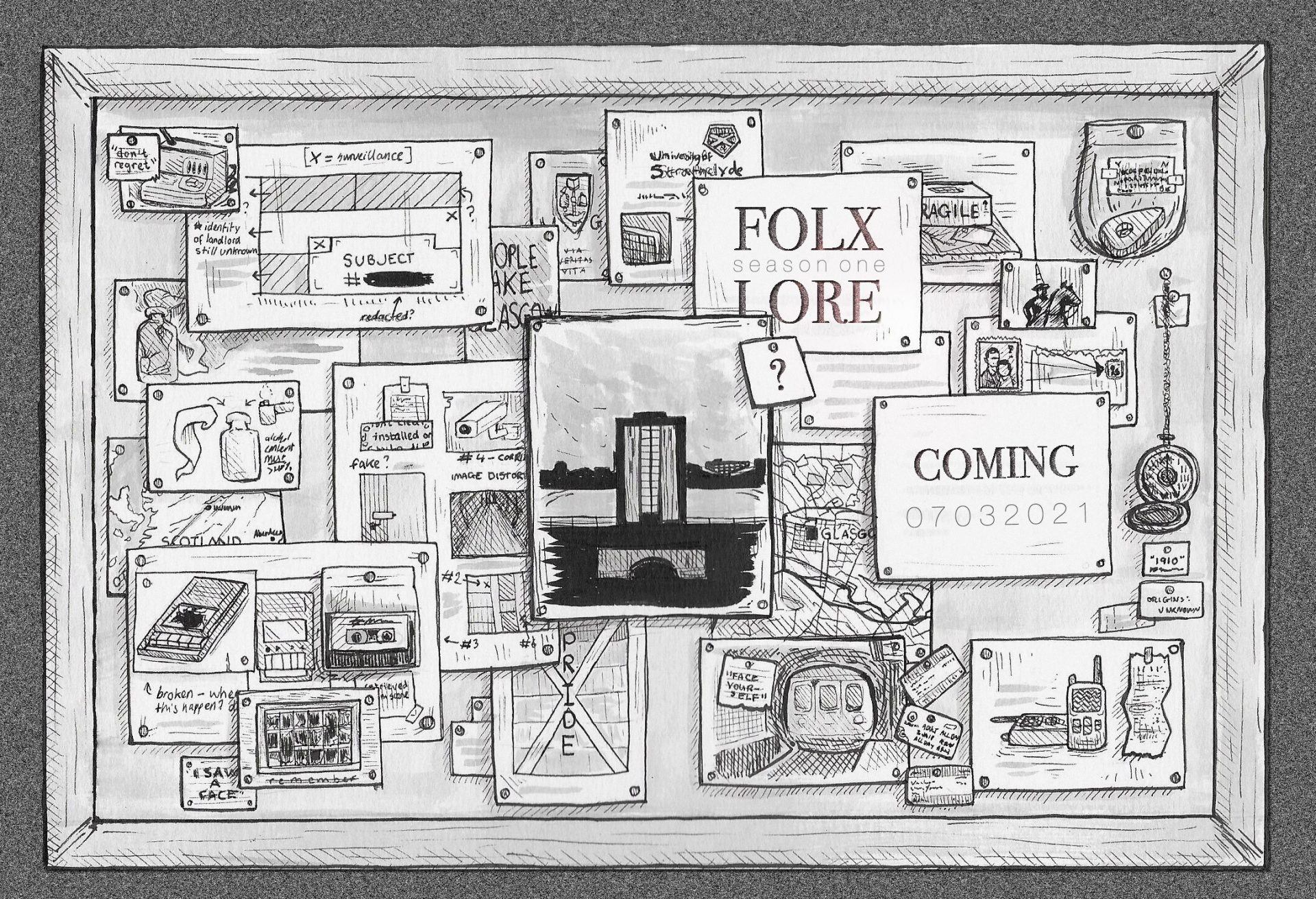 A collaboration between Tin Can Audio and In The Works, Folxlore is a horror-anthology podcast set in Glasgow, by queer people for queer people. It focuses on people living between two worlds – both literally in their existence within a heteronormative world which considers them abject, and figuratively in the eldritch horrors that manifest throughout the city.

Currently on a mid-season break until 11 April, the first half of series one addresses themes of anxiety, paranoia, and queerphobia in a variety of different narrative styles. It’s worth noting that while queer-, trans-, and homophobia are addressed as a theme in some episodes, it is never exploited. The aim is to ensurethat the audio drama can be enjoyed by all. Likewise, episodes include content warnings to pre-warn listeners of topics that they may find triggering. It’s something rarely featured in horror, which many can find alienating; however the writers successfully do so without sacrificing any of the horror or the discomfort that comes with it.

Each episode is its own self-contained story and the writers each create a unique feel within their narrative, despite the shared medium and what many incorrectly assume about audio drama. Seance by Ross McFarlane follows the ‘Ghost Patrollers’ – a group of teenage urban-explorers-come-ghost-hunters – who descend into an abandoned Glasgow subway station in search of mystery only to find a hungering presence. While only presented though audio, the piece manages to successfully capture the environment of the piece. The characters’ voices echo off the underground tunnels, and have a deliberate rough quality to them as though captured by a sub-par camera and microphone. These effects conjure a sense of claustrophobia and paranoia as they question if what they hear is just background noise or something far more sinister.

Intruder by Syd Briscoe is a monologue framed as a Reddit post, in which an anonymous delivery driver recounts the nightmarish happenings that transpire in an old tenement block she delivers to. What could be a meandering monologue is greatly enhanced by audio cues throughout -doors slam, cockroaches scuttle across the floor, and a fading light-bulb buzzes. It’s an unsettling piece with a solid concept; the only major downside is Hannah Raymond Cox’s choice of voice. Utilising a generic nasally, Yorkshire accent for the delivery driver doesn’t necessarily make for the most captivating narrator unfortunately.

Cameras converse between themselves and omnisciently narrate the comings and goings of the various residents of an apartment block in Bibi June’s Surveillance. As they do so, gossiping all the while, they try to deduce what the occupant of flat 9D is so afraid of. Perhaps the most experimental of the four pieces, June utilises the universal fear of being watched to create a fascinating microcosm that is fundamentally unsettling. Each camera – Hal, Ellie, Cornelius, Cam, and Lobby – feels like a fully established character despite the brief time spent with them. Moreover, narrative repetition and moments of silence (save for the typing of a keyboard) help to craft a superb sense of paranoia and unending fear.

Elevator, a collaboration between the three previous writers, rounds off the midpoint of the series. Two transphobic parents find themselves trapped in an elevator descending deeper and deeper into the nervous-system of their building. Both Briscoe and Raymond-Cox excellently depict parental narcissism and an entitled attitude that make the parents suitably deplorable. While it’s refreshing to see a reversal of tropes typically found within the horror genre – especially trans- and queerphobia – the entire affair feels a bit too heavy-handed. The closing ruminations of an omnipotent voice chastising their behaviour especially lacks weight. Ultimately, it feels a bit too much like something from Grizzly Tales for Gruesome Kids, than the powerful statement on respecting fellow humans beings that are different to oneself, especially one’s children.

While strong writing pervades here, there is an unsung hero in the form of David Devereux’s audio design. His work on the episodes helps to transform what would ordinarily be a creative and refreshing set of horror experience into something far greater, and far more unsettling.

At the time of writing, Folxlore is only halfway through its first season; however if the first four episodes are anything to go by then the creative team are brimming with potential and something truly great awaits in the rest of the series.