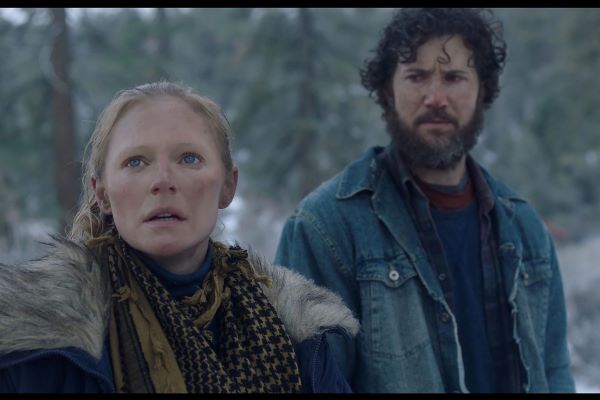 Forget Everything And Run

COVID and zombies: that didn’t take long. In this tiny-budgeted drama, a pandemic has caused curfews, lockdowns and other impositions that by now barely qualify as allegory. Here, the infected become undead of the speedy post-28 Days Later variety. They are also largely a background threat. There are plenty other dangers facing the central family, although few that will cause any surprises for connoisseurs of cinematic eschatology.

Joe and Ethan Allister (Marci Miller and writer/ co-director Tobias) have managed to navigate the catastrophic events of the pathogen that has all but destroyed society. Ensconced in a ramshackle shelter, they are trying to survive in a hostile landscape. This is made much harder by the fact that their daughter Mia (Cece Kelly) has been bitten. There is a vaccine, but it is 50/50 kill or cure. Of more pressing concern is the gang of marauding home invaders who are out to strip the Allisters of their dwindling supplies.

Forget Everything And Run has been lazily billed as a cross between The Walking Dead and The Revenant. It is technically true in that there are zombies and it snows, but this piece of marketing puffery gives a false expectation. If Reisner and Tobias’ film resembles the relentless TV behemoth, it is in that show’s quieter moments where the survivors try and establish some makeshift normality. F.E.A.R‘s zombie moments bookend proceedings, but for the most part the threat is entirely human. This isn’t necessarily a flaw; The Battery is a great example of less-is-more on that front, but F.E.A.R lacks the personality of that cult favourite, among other things.

Like A Quiet Place or The Road, F.E.A.R plunges the viewer directly into a bleak situation and fleshes out its characters and situation through judicious flashback. This does little more than clue us in that the Allisters were very much a tight-knit family, and that young son Josh (Danny Ruiz) is a potential liability in a crisis. It does however establish the easy, carefree relationship Joe and Ethan had before necessity chiselled away everything but grim survival. Miller has the greater contrast; her pale blue eyes sparkling with mischief at a bar in happier times, and set as hard and frigid as their wintry environment in the present. Tobias’ writing has the sense to depict Joe as every inch as capable, resourceful, and determined as her husband. Whatever flaws the film has, Miller goes a long way to keeping it watchable, particularly during a blackly existential stand-off against the invaders’ grizzled matriarch (Susan Moore Harmon).

This tense set-piece is the film’s highlight; a self-contained chamber drama between two mothers. We know who we side with, but both are simply doing what they see as necessary to survive. Counter-intuitively, once the action ramps up – by the standards of this restrained work at least – it becomes less interesting, succumbing to the expected genre tropes and a large dollop of sentimentality that had been steadfastly absent.

By no means disastrous as a small-scale undead drama, Forget Everything And Run nevertheless is drawing on a wellspring of genre goodwill that is rapidly depleting. Perhaps it’s pandemic fatigue, zombie fatigue, or some combination thereof, but it is going to take some special element for a film dealing with these themes to shine. Reisner and Tobias’ film lacks that hook, and makes similar mistakes as numerous others. There is a rather surprising streak of optimism, which is very welcome, but little else to stand out.