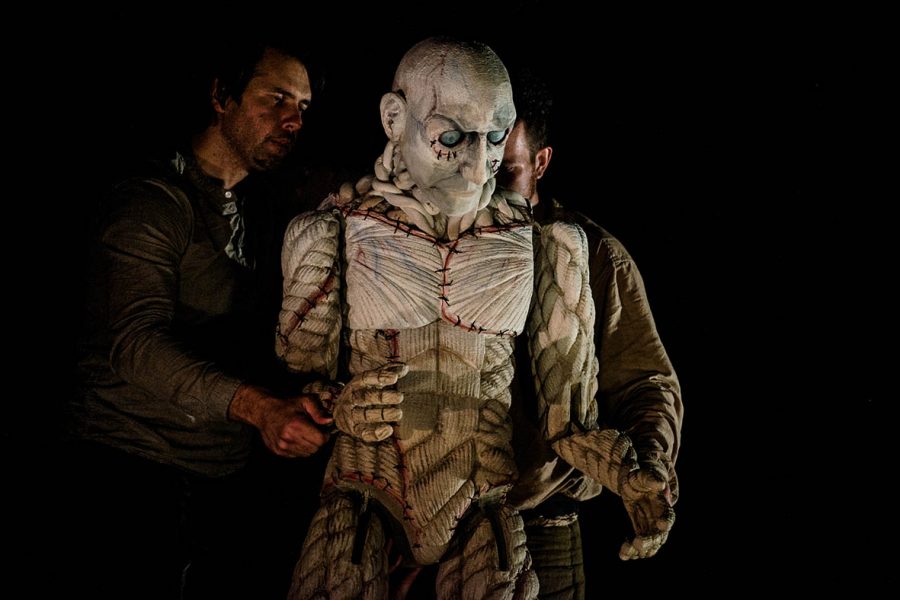 In fear of sounding like a tabloid, it is only October, right? The retail sector seems to have forgotten. Meanwhile, in the run up to Hallowe’en, The Brunton stages the nightmare classic of the romantic and gothic period of literature: Mary Shelley’s Frankenstein, this time adapted by the unique Blackeyed Theatre, complete with a newly crafted monstrosity.

The real beauty of Blackeyed Theatre’s production of Frankenstein is it maintains the gothic without resigning to cliché. Instead, writer John Ginman strays little from the source. It conveys the Doctor’s descent into madness without resorting to pitchforks and shrieks of ‘it lives!’.

It’s easy to deliver folly when portraying the archetypal mad doctor, but Ben Warwick gives a respectful performance. With tremendous fluidity in his movement, the bustling nature of Frankenstein’s eternally thought-filled head is projected through his limbs. Max Gallagher’s portrayal of Henry manages to be both subtle and over-the-top with the foppishness typical of the romantic genre. It fits perfectly with Shelley’s original story.

There’s an intense visceral connection between the audience and sound design by Ellie Verkerk. Performers who are not required for the scene provide live music. A tension-filled creak of ice, concoctions bubbling in Frankenstein’s laboratory or the Monster’s heavy drummed footsteps are all delivered from the stage corner. At times slightly distracting, it takes a few moments to ignore the cast members walking over to the instrumental set.

Whereas cinema steadily relies on computer generated content to bring to life our inner horrors, theatre maintains a strong relationship with the physical nature of puppetry. Yvonne Stone’s Monster is nothing short of sublime. It’s subtle in its design, keeping the open tissue and stitches present, without slathering the creature in green paint and bolts.

Both the Monster’s swansong and the soliloquy on its origins are the keystones to the production. Combined with expert operation from the cast, particularly Louis Labovitch’s voice of the Monster, a majority of the success this evening lies with the creature. Kindling so much emotion from a non-human entity is difficult, but if successful, it can be masterful theatre. As Labovitch recites Paradise Lost through the abomination’s sunken mouth, the creature’s milky eyes scan the room. Any murmurs and fidgeting within the audience freeze once the creature speaks. It commands respect, attention and represents that which Blackeyed Theatre strives for – innovation.