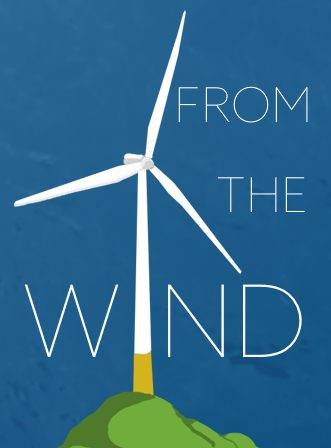 An attractive blend of verbatim, social history and story

It all fits. BoxedIn Theatre from St Andrews perform From the Wind inside their 30-seater ‘Greenhouse’, their zero waste venue that has popped up (after two and half weeks committed effort) within the landscaped entrance to Dynamic Earth. Director Eilidh MacKinnon may describe her half hour play as ‘anecdotal’ but it is nonetheless a constructive and interesting round of story telling.

The audience sits on wooden benches that surround the space. Four performers are in the centre where there are four plain chairs, set two by two and back to back. One lady knits, one hangs out her family’s washing, one yells out in exasperation at the teenage daughter who’s moaning that the internet has ‘gone’ again. The fourth is a dapper man, who begins to thank Theresa May. ‘Thank you Theresa’ for announcing the legal commitment to end the UK’s ‘contribution’ to global warming by 2050. That’s 30 years to get to net zero greenhouse gases. How will Scotland manage? This is where the conversation and the stories begin.

MacKinnon’s nimble script uses a mix of reminiscence, opinion and official record. If it’s steered at all, it is by the Speaker (an impressive and composed Daniel Heidland). He is ‘an investor in projects’ and has the technical knowledge that Community Energy Scotland would be proud to enlist.

The three women talk of their own lives. This includes the past (before wind turbines) and also the present (where the recycling bins seems to change colour every week). Where there is argument it is between the Speaker and exasperated mother (Isabella Sheridan) who just wants her electricity to be affordable and constant. The old woman (Isi Webb-Jenkins) remembers peat smoke and the fragile mantles of her Tilley lamp and is pleased to now just flick a switch. However a younger islander (Juliette Boobbyer) is getting fed up with all the academic surveys. From the Wind, for all its simplicity, is ably and carefully done and creates an appreciable awareness of ‘renewables’.