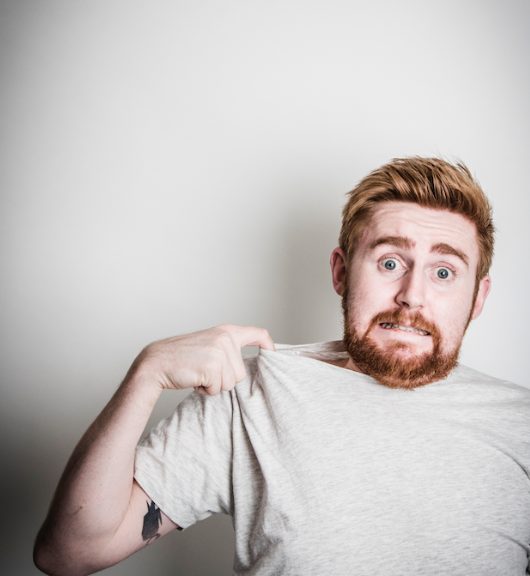 For some people it’s quite difficult to look back at your childhood memories without wanting to throw yourself off a bridge, yet Gareth Waugh revels in revisiting the glorious naivety of his wide-eyed youth with cheerful optimism. Despite Oh Boy…! mostly existing as an exercise in self-deprecation, it’s done in such a way that still lets the performer come out on top of it all, humiliated but unscathed.

The concept of the show has roots in a high school jotter Waugh found when moving house, containing a bucket list he’d written as a 17-year-old with aspirations such as ‘drink on every continent’, ‘be on TV’ and ‘rap live’. So far he’s lived abroad and appeared on an STV chat show but ‘Rap Live’ stands out as an odd addition to the list. It turns out Waugh was at one point an amateur 14-year-old rapper named ‘G-Tip’, producing a surprisingly catchy but lyrically inept demo he presents to the audience. This is a bold move as anyone who has recorded music as a teenager knows 99% of it is cringeworthy, poorly executed crap. To turn that into the centrepiece of your fringe show is either very brave or very stupid!

Like many excitable local performers on the festival, Waugh can’t help but stray off on tangents but, to keep the hour from turning into a loose web of musings, he’s kitted out with a clicker and a PowerPoint presentation to keep things moving. It is, however, clear that he can hold his own as a comedic storyteller without these devices.

There’s not a lot of fat on his jokes and it all lands on pretty solid footing. The audience are granted a sense of comfort listening to somebody’s missteps and dreams because it feels realistic and oddly familiar, even if it doesn’t really explore the person they are today. That said, his distinct storytelling style, free from the usual cynical trappings of the format, and his invite for us to laugh at his painful resume of teenage accomplishments, cements Waugh as one of Edinburgh’s most likeable performers.