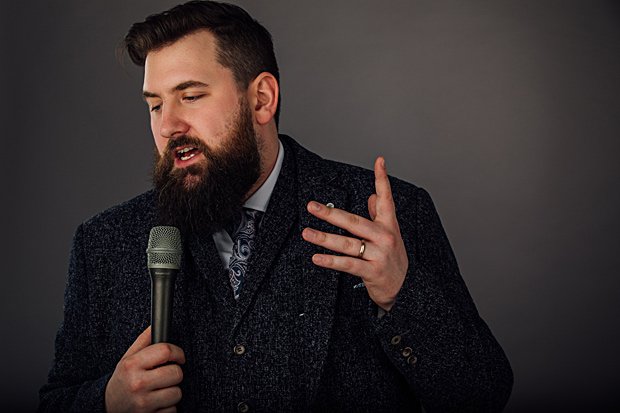 An hour of stories, jokes and rants from grouchy Fringe regular

Garrett Millerick brings his trademark grouchy comedy back to the Fringe after his 2018 smash-hit show Sunflower wowed audiences with its heartfelt ‘sad bit’. This year’s effort, Smile, promises to be just stories and jokes and, for the most part, is a decent hour of comedy.

Millerick delivers his set with all the subtlety of a sledgehammer, the microphone merely a prop as he booms stories at the audience about competitive exercising, Ramsay’s Kitchen Nightmares and asks whether toxic masculinity is actually a good thing.

Some of Millerick’s viewpoints do not go down well with the afternoon crowd – a jibe about the ‘virtue signalling’ Emma Thompson continuing to fly when she’s an ardent supporter of Extinction Rebellion feels like an attack on the queen of liberal arts in the place that launched her career and some audience members make their distaste known.

A bit on being fined for not using the correct recycling bins launches Millerick into a tirade about environmental panic – a strong stand to take in a Fringe where climate change is a hot topic (pardon the pun). He’s decided he can’t worry about everything so chooses to support causes he feels more passionate about – like homelessness.

There doesn’t seem to be a strong narrative thread to the show other than ‘misanthrope rants about life’ and we get anecdotes on re-watching Men Behaving Badly (which hasn’t aged well), a tone-deaf impersonation of a Chinese accent and a delayed Ryanair flight gag that feels a bit uninspired.

Somehow, as the hour is coming to an end you realise there has been a point to proceedings, with callbacks and reframing of earlier topics. Turns out Millerick is doing his bit for the environment by not shaving, wearing clothes for years and washing with soap. It’s the women who fill their bathrooms with plastic bottles who are doing all the damage to the planet (cue more audience groans and one woman muttering to herself for the rest of the show).

Millerick isn’t a bad guy, he just wants to cut through the things he perceives to be bullshit. At the end of the show when he gives the ‘bucket speech,’ he asks us to donate the money we would have put in Millerick’s bucket to a volunteer from Shelter who is standing at the venue exit. He’s raised over £3500 this Fringe and the effort buys back some goodwill from the grumbling audience members.