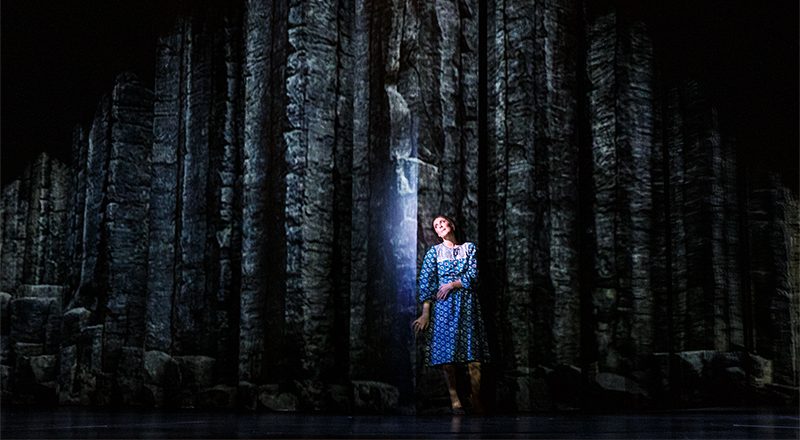 An oft-exhilarating opera with some dramatic deficiencies

Lars Von Trier’s Breaking the Waves seems a somewhat unusual film to turn into an opera given the movie’s stark austerity and complete lack of underscore. However, on another level its heavy faith-based themes and central tragic heroine make it a natural fit for the art form. Adapting the film also seems risky due to the movie’s controversial reputation and the accusations of misogyny that have dogged it over the years. It’s more surprising that it has been adapted by female composer Missy Mazzoli alongside librettist Royce Vavrek.

Those expecting a radical feminist take though will be sorely disappointed as plot-wise it stays true to the film: it tells the story of Bess McNeil (played here by Sydney Mancasola) who has a series of increasingly dangerous sexual liaisons with various men. She does so at the behest of her husband Jan (Duncan Rock) after he is paralysed in a rigging accident off the coast of Skye.

Mancasola beautifully plays the role. She is incredible, both in terms of stage presence and vocal performance. She particularly shines during her conversations with “God”, each of which is dramatically staged as she goes to-and-fro with a menacing-looking, bare-chested male choir, the score laced with bursts of violent electric guitar.

Mazzoli’s compositions are excellent. Each perfectly matching the mood of the piece, be it the crashing brass-heavy sections – evoking the bleakness of the remote setting and Bess’s situation – or the flutey pieces, which bring to life Bess’s reveries. There is also an interesting mix of instrumentation, with traditional instruments accompanied by a dash of electronic music.

Then there is the staging from director Tom Morris. The stage set-up consists of a series of grey monoliths sitting on top a black revolving stage, with the blocks having various locations projected upon them. This set-up gives the stage a suitably harsh and foreboding feel, perfectly accompanying the downbeat tone.

Despite these stunning elements within the production, it doesn’t make up for the fact that the central story remains contentious. While Vavrek’s text intelligently tackles the source material’s themes of faith and ‘goodness’, little is done to overturn or subvert the hoary old ‘fallen woman’ cliché.

There are also some dramatic decisions that de-fang the story. For example, the church councilmen are less hateful than in the film; a move that makes them more a nuisance than anything else, and also has the knock-on effect of making Bess’s punishment shorn of its dramatic intensity. Bess’s final tragedy also feels rushed; while undoubtedly a sad, brutal moment, it fails to have quite the same heart-breaking impact as the film.

Breaking the Waves is an impressively staged, impeccably scored production anchored by a powerhouse central performance. However, there are some dramatic deficiencies, and the opera is likely to be just as divisive as its inspiration.