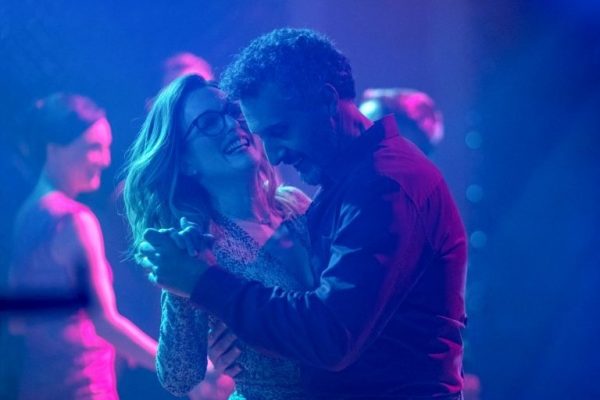 A remake of director Sebastián Lelio’s own 2013 film, Gloria Bell has transposed the previous version’s Chilean setting to an indistinct Los Angeles, in which Gloria (played by Julianne Moore) tries to restart her love-life years after divorcing the father of her children. Gloria is introduced in a singles’ bar, trying to find her place in the room; the colour of the lights are shifting as she thinks, the disco in full swing around her advertising the film’s extensive rights’ budget (that is an expensive soundtrack, make no mistake). On one of these nights she finds the eyes of Arnold (John Turturro), a more recent divorcee, who notices that she’s happy and says as much. She replies that she is and she isn’t. They begin dating, but it’s never that simple.

Both have family commitments, but their positions are inverted: Gloria’s children (played by Caren Pistorius and Michael Cera) have started lives of their own, having seemingly no need for her recourse; whereas Arnold is dragged in to support his dependent daughters at every opportunity. Arnold’s willingness to sideline Gloria creates a wedge in the relationship, and results in a comic comeuppance. Moore’s performance, which is the best thing about the film despite moments of coasting, is powered by her star-presence, the wattage of her screen personality. And yet that personality is characterised by Moore as someone somewhat over-doing it; beneath the cool exterior, Moore’s Gloria is a tad obsequious, a little too eager to please: desperate to be loved.

But only Moore is clear on this; Lelio is an indifferent director, and his latest effort is encased in vagueness. Think of the least involving or creative way you can of staging and shooting a scene in which two characters converse: Lelio has beaten you to it. Encounters between Gloria and Arnold, conveyed in a staid shot-reverse-shot manner, are allergic to rhythm and the sense of the scene, which is partly the fault of a deficient script: the conversations are over before much of note has happened or been suggested, and, worse than that, there are many attempts to subtly revise clichés from romantic – and arthouse – comedies in this film — all of the revisions turn out to be clichés as well.

What saves the film, to a degree, is its music. Gloria dances to various disco classics in her club escapades, and many sojourns in her car are passed by singing along to the radio. She seems to believe the lyrics, with their unashamed declarations of romance, their espousal of delight in life and love. Gloria Bell’s best moments are musical, whether these are the dancing scenes, which get at what’s joyous about pop music, or the score by Matthew Herbert, which alternates between classical arrangements intruded upon by electronic, William Basinski-like phrases, or synth-heavy accompaniments which could, at any moment, break into a disco track groove. It’s pleasant listening. Which can’t be said about the film — try as it does to emulate the lyrics of Gloria’s music, the song it sings just isn’t very good.